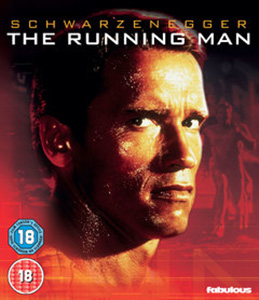 It’s difficult to remember sci-fi being a seriously fun genre, even more difficult for someone born during the mid-90s. There is definitely sci-fi comedy, sure, but examples of sci-fi that isn’t an all-out comedy having fun with the endless capabilities of the genre seem few and far between what with
all the Black Mirror’s and so on. Examples of serious sci-fi that can genuinely cause a wide smile are actually spread quite thin.
God, re-watching The Running Man was refreshing.
Reviewing The Running Man almost seems pointless if I’m being perfectly honest, but for those who haven’t seen it, I’ll digress.
Arnold Schwarzenegger plays the grizzled ex-law enforcer of an oppressive dystopian government, Ben Richards. After refusing an order to murder unarmed protestors, the protestors are killed regardless and Richards is thrown into a prison camp. Joining up with a resistance, Ben escapes only to be captured soon after, and forced into the world’s most beloved gameshow, The Running Man: a show where hardened criminals are pitted against deadly warriors in deadly gladiator matches.
Richards must now fight not only for his life, but to protect those close to him and to prove his innocence.
The Running Man is stupid, camp, poorly acted (for the most part) and as blunt as a baseball bat. But goddamn is this film is enjoyable. There isn’t a whole lot this film does that hadn’t been tried or penned before. It knows this though. It knows it isn’t high art. It didn’t invent dystopia and that is
completely fine because it knows what it’s doing and does it so fantastically well.
If you’ve ever seen an Arnie film then, for the most part, you’ve seen this film. One-liners, ridiculous action, a love interest that is ripped away from her boring life by a pair of big, strong Austrian arms. It’s all here and in delicious abundance.
Some of Arnie’s best moments are here too. My favourite part is when Arnie finds himself pitted against ‘Sub-Zero’ (no relation), a Japanese hockey enthusiast who favours the use of a razor-sharp hockey stick in combat. After besting him to the shock of the audience, Arnie turns to the cameras and bellows “Here is Sub-Zero! Now, Plain-Zero!”. One-liners like this should be taught in film schools, I swear.
As happy as I am with the fact that I got to review a film I absolutely adore for once, this is a review and this, shockingly, is far from a perfect film. As enjoyable a film as this is, it doesn’t really delve into any of its philosophical ideas rather than just plop them in front the camera.
Now, I know mere paragraphs ago I said that this is completely fine because it doesn’t need to be more than it is and I stand by that. But it wouldn’t have hurt. The problem in this regard is that if you were to come to me and ask me to recommend a sci-fi Arnie film, there is not really any reason for
me to recommend this over Total Recall, Predator or Terminator (the first two anyway).
A little more substance in its themes certainly wouldn’t have hurt the films action-packed fun factor. Just look at something as godlike as Robocop.
At the end of the day, The Running Man is certainly a film in the Schwarzenegger filmography. It’s not his best but it’s certainly not his worst and definitely worth a watch if you want a silly, fun and completely ridiculous take on what is usually a pitch black and serious sub-genre.
Brilliant. Only avoid if you’re completely opposed to the mere idea of fun.
Review by Joel from a disc kindly supplied by Fabulous Films.

I like to think I'm a critic out of spite for all the criticism I receive in film school. I enjoy consuming all things entertainment and art but I enjoy pretending I could do any better even more. Jokes aside, I absolutely adore creating and interacting with all art and entertainment. Always happy to air my obnoxious opinions on games, films and music and I can only hope you also get some kind of sick kick out of reading them.
Live Event: Uli Jon Roth, St Silin’s Church, Llansilin, June 21st, 2019 NEMESEA premiere first single from upcoming album

RT @60MinutesWith ** 3rd GO ** RT (& follow us) for a chance to #win the upcoming 30 disc Complete Series of Northern Exposure courtesy of @FabulousFilmsTV For 10 more chances to win see here: 60minuteswith.co.uk/news/give… ***Every RT gives you another place in the draw*** #Giveaway #Competition pic.twitter.com/CuK2GKM3z6