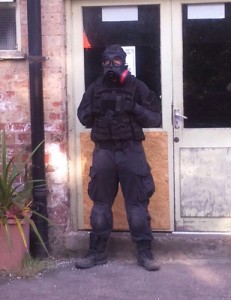 Have you ever wondered how you would survive in the event of a zombie apocalypse? Would you crumble under the pressure? Would you waste your ammunition? Would you stab other survivors in the back and steal their stuff? If these thoughts have ever crossed your mind at anytime in your life then Zombie Uprising is for you.

I was lucky enough to receive two tickets to Zombie Uprising in Burton for my birthday. As we arrived there were two things that stood out from the normal residential street. The first being the huge foreboding looking building and the second being greeted by two guards dressed in assault gear including gas masks. As we waited outside the building we could hear shouting and screaming from the participants inside. If I didn’t need a clean change of underwear before we started, lets just say that by the end of the night it was an altogether different story.

After handing in our papers to one of the guards we received our briefing on what to expect from the zombie experience. Before we could face the hordes of undead we were issued with our choice of firearm, a pistol or shotgun. Although the shotguns looked badass, I personally went with a pistol as we were told it held more rounds. The weapons we were using were Airsoft guns and although I’m no expert on firearms, they looked and felt like the real deal. We were also handed protective eye googles which had to be worn at all times.

The guards explained that for all intents and purposes the building was derelict therefore potentially dangerous. We were advised that the main thing is to use common sense and not to go charging around corners or run around in the pitch black. There were 18 of us in total so we broke off into 3 groups of 6. We were green team. We were then led though the building by soldiers to our starting point. This was the perfect way to begin the evening and set us up for what was to come later.

There was a soldier in front of our group and one behind. Imagine being shouted at by the drill instructor from Full Metal Jacket and you’re close to what we experienced. The rooms and attics we were led through ranged from well lit to virtually pitch black. They didn’t tell us there were zombies littered about the place and they scared the crap out of us. There was no firing from our part yet as the soldiers held the zombies at bay. When we reached the control officer we were told about our enemy and objectives ahead. The zombies are initially slow moving and can be taken down with one shot however, the more times they are shot the faster they become and harder they are to stop. We were issued with a survival pack which contained 2 torches to be shared around the group, a radio to keep in touch with control, a map and backpack to keep items in. 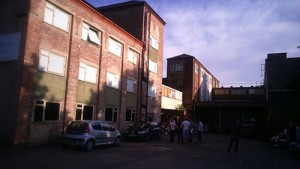 The aim of the game is to complete objectives which can range from collecting intelligence, escorting a survivor to the control room, finding keys or collecting bombs. When you completed the tasks your team received points and were issued with a reload token to take to the armoury. There were plenty of opportunities to get reload tickets so there was no need to purchase additional ammunition. One of the toughest choices we had to make was deciding when to go to the armoury or try for one more objective even though you are low on ammo. You couldn’t just walk to the armoury either as the walking dead stood in your way.

The objectives gave the event a real sense of focus and the 3 hours of game time flew by. Of course the zombies weren’t going to take chunks out of you but if they did grab you they had red paint on their hands which indicated you had also become infected. If this happened (as it did to me) it didn’t affect the game and you were free to continue playing. However they did say any infected players would be thrown into a skip and burnt at the end of the night.

Although we knew we were playing a game and never actually in any real danger from the zombies it didn’t stop it being one of the most terrifying and exhilarating experiences of my life. I don’t think I’ve jumped (or cursed) as much as I have in the 3 hours that we were there. We also developed a real sense of camaraderie and “leave no man behind” attitude with our fellow team mates. We would often shout “green team” to locate each other through the darkness if one of us fell away from the main group or became surrounded by zombies.

When the final objective was complete we were led back to the main area and everyone (including zombies) received a huge round of applause. The extremely friendly staff announced the final points total and I am pleased to say that our team won by 5 points. It sounds corny but its true when I say that despite not knowing the 4 other team members before playing, it felt like we had shared in a real bonding experience. We posed for photos with the zombies and went our separate ways.

I would offer some advice to people who are thinking of taking part in Zombie Uprising. You do need to be fairly fit and you will be crouching and moving for 3 hours. There are low ceilings so be careful not to bump your head especially if you are around 6 foot tall. There are drinks available at the armoury so take some money or a drink with you as you will need it.

Zombie Uprising was incredible fun, despite being absolutely terrifying at times. It’s amazing that even though we were playing a game we quickly got totally lost in the moment and it all seemed so real. Being chased by zombies or an infected guard carrying a riot shield, knowing you have limited ammunition is a thrill I wont forget for a long time.

Visit www.zombieuprising.co.uk for more information including booking an event.

I love video games and movies as much as I love my children. However, I'd rather face off against the worst end of level boss, and watch the scariest horror movie than visit another soft play! Thanks for taking the time to visit the website and read this review. Please send any complaints to Dave and any money to me!
Review: Quatermass Live Event: John Robertson