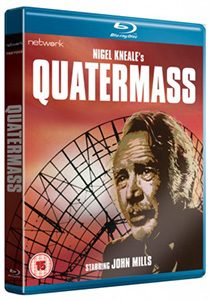 Professor Quatermass (John Mills), a retired scientist, is travelling to appear on a TV show about a shared Soviet/American space mission, but it appears in this dystopian future there is danger all around. After being abandoned by a cab driver, Quatermass is saved from a gang by Joe Kapp (Simon MacCorkindale), who is also a guest on the programme.

The name ‘Quatermass’ is enough to make anyone my age or older, shiver. He is one of the iconic characters of British Science Fiction created by Nigel Kneale (all the Quatermass stories and the very scary TV version of The Woman In Black), he invented an intellectual and serious man, a stalwart of decency and Britishness.
The story is a pretty straightforward alien Vs humanity stand-off, but on re-watching this (I vividly remember seeing this when it was on TV in the late 70s) I got the same sense of uncomfortableness I had originally. I remember finding it quite scary as a kid and although not as horrific and scary as I once thought, I still found it incredibly unsettling.

A group of hippies feature largely in the story, who Kapp refers to as “Planet People” as they hope to be magically whisked away to a better world. Quatermass is looking for his grand daughter and unknown to him she’s one of the planet people. They are really annoying and unfortunately do date the series. Clare Kapp, Joe’s wife is an archaeologist and has been conducting a dig on a burial mound ‘Ringstone Round’ near the two radio telescopes that her husband and his team maintain.

Without giving any more spoilers away, I will say that despite it’s 70s fashion, some truly annoyingly over-the-top-acting (not from John Mills, who is superb all the way through this) this mini series is really a one-off and well worth a watch. The story itself, a dystopian future so loved by ‘tween’ writers now, talks about humans place in destroying all that’s sacred, and one very interesting thread is Judiasim as the oldest and most noble of religions, being immune to ‘alien invasion’ sort of like Indiana Jones but a lot more serious.

A great package from Network On Air, the picture looks like it was filmed in Hi-Def yesterday, and that overwhelming uneasiness is palapable. Great stuff!

Review by Tina (co-host of 60 Minutes With) from discs kindly supplied by Network On Air.

I used to live in Los Angeles and write about Rock bands. Now I live in wonderful Wales and write about films. I like video games (especially RDR2) and am also a painter...gratuitous plug: follow my art account on Instagram @artbytinar
May 2015 Entertainment Chat Live Event: Zombie Uprising