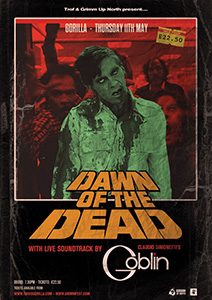 Dawn of the Dead (1978) is my all time favourite movie and one which I have literally seen over 100 times (a friend and I once went 24 hours watching it non-stop on VHS back in our youth). The European version of the movie (for there are many) is scored by Goblin, a band that performed on many of Dario Argento’s movies, such as Profondo Rosso and Suspiria. So you can imagine my excitement when seeing that Goblin were going to be performing the soundtrack to Dawn of the Dead live while it played on a big screen.

The venue for the gig was Gorilla in Manchester; a bar/restaurant that also has a thriving gig venue attached to it. While I didn’t have any food or beer there (I was driving) I can attest that the venue is great for gigs and its location makes it easy to get out of Manchester without getting stuck in any of the crazy traffic that builds up in the city centre.

I got there 40 minutes early and there was already a queue of 10 people in front of me, and by the time the doors opened at 7:30pm the queue behind me was snaking around the corner.

After a quick look at the merchandise stall (snapping up a 30th anniversary ‘Demons‘ t-shirt ) I made my way to the front of the stage and the wait until Goblin were due to begin at 8:40pm. Being one of the first in meant that I could pick a prime position for the night and I located myself right by Claudio Simonetti’s keyboard and with an unobstructed view of the screen.

At 8:40 prompt the band took to the stage accompanied by a huge roar from the crowd. The lights dimmed and the movie began.

Now as I said earlier, I have watched this movie into triple figures and know the dialogue and score off by heart, but NEVER have I experienced a viewing like this! The music pounded your very soul and took on a ferocity that can not be replicated at home, no matter what sound system you have and how loud you play it. The band were timing everything to perfection and each scene resonated with me like never before. The hairs on the back of my neck were standing, goosebumps were appearing where they’d never appeared before, Claudio Simonetti was playing the keyboards less than 2 feet away from me! As you can tell, I was having a good time.

All too quickly the end credits rolled and the band took a bow (not before I got a handshake from Claudio though). People started to get their things together to leave but were quickly stopped in their tracks as the band returned to the stage asking if we’d like some more. You can guess the reply.

A montage of shots from ‘Demons’ appeared on screen and they kicked into it’s music and I was so excited that it was a good job I’d got the stage to lean on our else I may have fainted. This was quickly followed by playing along to some of Phenomena before finally departing for good at 11pm.

Apparently this was the 2nd time that Goblin had played at Gorilla, so I advise everyone to keep checking their website for all future gigs. It was an evening there that will live with me forever (you can even see me awestruck in the video below).