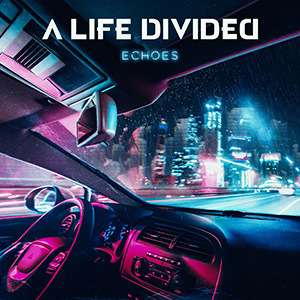 A LIFE DIVIDED have released their new single ‘Addicted‘, the second track taken from new album ‘Echoes’, due for release on 31st Jan on AFM Records.

Modern rock with an 80s touch! Imagine you could send your latest favorite rock record on a journey through time and into the past – what would it sound like? That’s exactly what A Life Divided had in mind when creating their new album “Echoes”.
“It was during the 80s when we first came into contact with music. At that time I bought my first Adidas Allround sneakers, let my hair grow and played the songs of my metal heroes on guitar”, recalls vocalist Jürgen Plangger, songwriter and producer Erik Damköhler was more of a synth-wave fan back then. “That’s how we came up with the idea of mixing our A Life Divided-style with the typical synth-sounds of the 80s. ‘Echoes’ as a result was something completely new: 13 songs that combine our dark alternative rock with the zeitgeist of the 80s”.

After German radio hits like “Feel”, “Space” and “Heart on Fire”, an award for the best newcomer from one of the biggest radio stations in Germany, tours with Apocalyptica, Eisbrecher, Unheilig and Oomph as well as sold out headliner club tours, it is without a doubt that A Life Divided and their blend of rock music with electronic elements are known across all scenes. The band currently consists of vocalist and songwriter Jürgen Plangger (also guitarist for Eisbrecher), guitarist Tony Berger (ex-Lacrimas Profundere) and bass player Tobias Egger as well as songwriter Erik Damköhler. The songs on the new album “Echoes” revolve around the theme of finiteness and the echo that is left from all of us.

“Finiteness is threatening when we love and live, but it can also be comforting when we grieve, experience hurt or have been disappointed. But there is always an echo, a quiet reminder, of what was.” – Jürgen Plangger (A Life Divided)