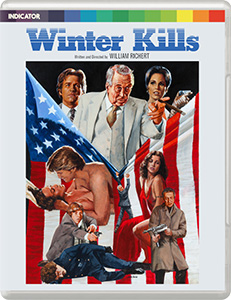 Based on the novel of the same name by Richard Condon, Winter Kills is one of those films that Indicator excel in: a ‘lost’ film, unfamiliar yet on watching you can’t believe you’ve never seen it before.

I suppose you could describe it as a black comedy about the fictional assassination of Jeff Bridges half- brother who was the President at the time, and is very similar to the assassination story of  President John F. Kennedy.

Nick is on a boat (why is he on a boat? We never find out) and is informed by Keifitz (Boone) that the dying man wrapped in bandages on a trolley in front of them knows who assassinated his brother. After a caper involving the assassin’s gun, Nick’s companion policemen are murdered in broad daylight in the middle of a city, and panicking Nick runs away and then attempts to phone his dad to tell him what’s happened, but he’s connected to his dad’s accountant Cerruti (Perkins) instead.

Even now I have no idea who he’s supposed to be in the film, a sort of … nope he’s literally just ‘mysterious’ And the set he’s in seems to be more Space 1999 than Texas.

Yes, it’s a weird film, like a cross between David Lynch and Terry Gilliam. Bonkers, entertaining and as crazy as a shithouse rat.

I used to live in Los Angeles and write about Rock bands. Now I live in wonderful Wales and write about films. I like video games (especially RDR2) and am also a painter...gratuitous plug: follow my art account on Instagram @artbytinar
A LIFE DIVIDED release their new album ‘Echoes’ on 31st January Chris’s Top 10 Call of Duty Games