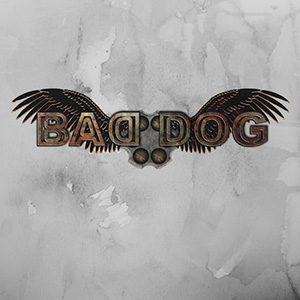 The track is from their recently released self-titled 4-track EP and is available for purchase or streaming from all the usual online platforms. Full of punchy riffs and power packed rhythm with nimble lead guitar, pulsating bass lines and catchy vocal melodies, the songs also translate perfectly to a dynamic live show. Indeed it was at a festival that Keith Lamley, owner of WDFD, first saw BAD DOG and decided there and then that he needed to have the guys on board.

BAD DOG are managed by Epic Venom Rock Band Management, and along with WDFD RECORDS, the band are hell bent on showing a wider audience what 4 friends from a sleepy town in North Wales have to offer.

BAD DOG.
BAD DOG’s brand of high octane, uncompromising rock n roll is rapidly gaining fans from all over the UK and beyond. The band released a self-titled debut EP, which features four tracks that have been described as full of punchy riffs and power packed rhythm with nimble lead guitar, pulsating bass lines and catchy vocal melodies.

Live, however,  is where Bad Dog really shine. Delivering a relentlessly energetic set that is extremely tight but full of groove and spontaneity at the same time. They make full use of their performance area be it a small club or a big festival stage often even extending it by spilling into the crowd to perform. They have headlined many of the festivals in North Wales and supported acts such as LA Guns, Electric Boys, Quireboys, Big Country, Dan Baird & Homemade Sin, Stacie Collins and Stone Broken. They are now looking to push out farther afield and spread the Bad Dog word around the UK.

Taking influences from Classic Rock, Metal, Blues, Funk and country they feel they haven’t even reached the tip of the iceberg of what they can produce and are very excited to share new music with everyone.