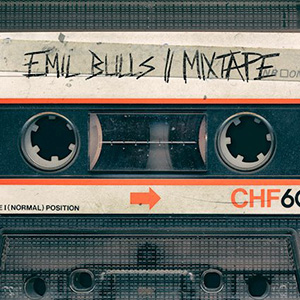 With their new album due out 24th May, the EMIL BULLS prove themselves to be one of the most versatile and positively unpredictable bands in the genre. With their new release ‘Mixtape’, the five-piece has given a fresh metallic touch to their own personal favorite rock and pop songs and rebuilt them in their own inimitable style.

The band has refined their recognizable signature sound and earned the status of one of the most independent, popular and successful formations in the metal scene, not only in Germany.

“Between working on our albums we still have to blow off in other ways to dissipate our excess energy,” explains vocalist Christoph about the emergence of ‘Mixtape’. “So we decided to cover the songs to that we listened when we were young, in the 80’s and 90’s
and which inspired us to make music by ourselves. On the other hand, we did not just want to confine ourselves to the most formative songs of our musical socialization, but we venture to sprinkle in even modern bands and artists”.

After a long selection process and out of more than 300 songs, the 14 most favoured remained, these were subjected to a distinctive EMIL BULLS makeover – from millionfold streamed hits from Eminem feat. Ed Sheeran, Bruno Mars and Billie Eilish up to classics like ‘Rebel Yell’ by Billy Idol, ‘Where Is My Mind?’ PIXIES, ‘Every You Every Me’ PLACEBO, or ‘We Built This City’ by Starship – names that are usually not mentioned in the same breath with EMIL BULLS. But that´s what it´s all about. Bursting musical limits and being off the beaten track.
“In the past, I always recorded mixtapes for long car trips,” continues Christoph, “a colourful mix of all conceivable styles and artists. Exactly this variety we wanted to transport with this album. It was about translating other artist´s musical language into our own. The biggest challenge was creating something unique without loosing the original´s special character”.

A tightrope walk which EMIL BULLS mastered perfectly together with reliable producer Benny Richter (CALIBAN, MOONSPELL). In the hot summer of 2018 they hunkered down in a holiday home deep in the middle of nowhere, to improve their fresh interpretations.
“It was an extremely instructive experience,“ reported von Freydorf. “Although it was hard work, we got a kick out of doing this. We figured out a lot about other artist´s songwriting and tried many things we’ve never done before.“

‘Mixtape’ first single was a tribute to the R`n´ B superstars DESTINY´S CHILD, their 2001 hymn ‘Survivor’. Christoph explains that it just means more than a cover version to the boys: “The lyrics are about always to cut one´s own path and never surrender, to my mind the statement fits perfectly with us as a band that survived almost 25 years in the rough shark pool called music business. We are incredibly grateful that our fans have been loyal to us for such a long time. With „Mixtape“ we´re laying on another unexpected soundtrack for our common journey and inviting everyone to join us again.“