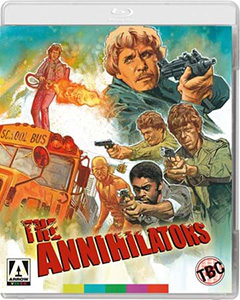 I LOVE b-movie action flicks from the 1980’s (listen to our ‘Decade of Decadence’ shows to hear myself and Thom wax lyrical about many of these gems) and The Annihilators is a classic within this niche genre.

You want Vietnam veterans on a revenge mission? Check.

You want a bad guy who chews the scenery in every scene he’s in? Check.

You want to see one of the heroes throw his entire body into 2 thugs to take them down in the most ridiculous start to a fist fight? Check.

All the usual b-movie action tropes are present and correct, with added flamethrowers and pencils in the neck for good measure.

Beginning with a group of ‘elite’ soldiers on a mission in Vietnam, the narrative then cuts to present day Atlanta where not all of the group have fared so well since the end of the war.

Now wheelchair bound, Joey tries to defend his dads store from one of the 3 gangs that are ruling the district. Unfortunately for Joey he receives a meat tenderizer to the head…many times. This is after he has been forced to watch a woman stripped naked and knifed to death too.

Hearing of the death of their former army colleague, the rest of the gang arrive in Atlanta to seek revenge and clear the streets of the hoodlums who are terrorising the area.

Yes, The Annihilators can’t be taken too seriously, despite its subject matter. This is a classic low budget 80’s action movie that tries to punch above its weight, fails to deliver any sort of gravitas, but delivers a whole heap of FUN.

It’s the type of movie to actively cheer for the good guys and boo whenever the bad guys are onscreen…especially Paul Koslo as ‘Roy Boy Jagger’; a man who is not afraid to strap a large flamethrower onto himself, despite bullets flying everywhere.

Watch as the ‘elite’ squad meticulously plan their actions (using toy cars of course), and then watch as the plans usually go tits-up and carnage ensues. Though the heroics of one member of the team to save the life of a little girl will have you in tears…of laughter at the ‘solemn’ aftermath.

Coming in at a lean 84 minutes (including 2 seconds which were previously cut for it’s UK DVD release in 2004) The Annihilators never outstays its welcome and is a riot from beginning to end.

Review by Dave from a disc kindly supplied by Arrow Films.