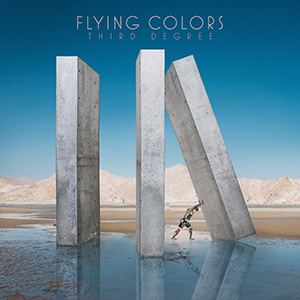 Flying Colors will be releasing their brand new album ‘Third Degree’ on 4th October via Music Theories Recordings. You can pre-order it HERE

And now, Flying Colors soar to even loftier heights with ‘Third Degree’, their third studio album in a decade. ‘Third Degree’ builds upon the genre-bending momentum of 2012’s self-titled Flying Colors and the aural-template ascension of 2014’s Second Nature. From the skittery psychedelic/classical turnaround of the lead single “More” to the Beach Boys-meet-Asia vibe of “Love Letter” to the deep emotionality of the album-ending, prog-leaning epic “Crawl,” the nine tracks that comprise Third Degree signify just how much Flying Colors are willing to explore new frontiers. “There’s a lot of ear candy sprinkled throughout every song,” observes Mike Portnoy, “and each one takes you on a little journey. As albums go, Third Degree is a complete piece that I don’t think ever overstays its welcome. I think it’s an enjoyable ride from start to finish.”

It continues to build upon the deep-rooted musical connection the members of Flying Colors established on their first two boundary-stretching albums. “There’s a real special chemistry between the five of us,” Portnoy confirms. “We keep getting better and better as we get more comfortable and more familiar with each other, and the music itself keeps getting more and more mature.” Adds Steve Morse, “This one, dare I say it, explores new ground for the band. One of my favorites, ‘Geronimo,’ has an upbeat, jazzy, heavy, melodic feel all at once. We just do what makes us smile and sounds good, instead of wondering how critics or program directors will like it. It makes for the best music!”
Casey McPherson concurs with his fellow bandmates by noting, “What Third Degree really proves to me is that we have our own sound. There are no egos in this band, and we all want the best parts to come out, which is such a joy for me to participate in. I think that really allows people’s uniqueness to show through.”

The first sessions for the record took place at Steve Morse’s studio in Florida in December 2016, wherein seven songs were written. From there, the band members had to scatter back to their other personal and professional obligations, eventually reconvening two full years later in December 2018, when three more tracks were added to the overall Third Degree mix. (The tenth track, “Waiting for the Sun,” will be made available in forthcoming special editions.)

As a songwriter, McPherson is never afraid to confront his feelings head-on, whether it’s the nostalgic bent of “Last Train Home” or the raw, relatable universality of “You Are Not Alone.”

Another progression has been the band’s use of technology to provide industry-leading sound. Third Degree was engineered with the award-winning Harmonic Phrase Analysis and Restoration (HPAR) technology. Developed by the band’s resident mad scientist, Bill Evans, he created HPAR based on the group’s performance styles — resulting in unprecedented fidelity. Flying Colors regular producer Rich Mouser (The Neal Morse Band, Transatlantic) then crafted a sumptuous mix in his inimitable style.