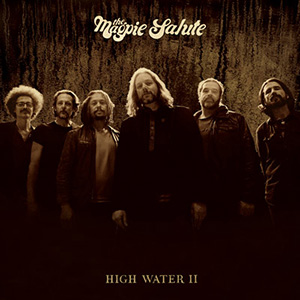 The Magpie Salute return with their new album, ‘High Water II’, which will be released on 18th October via Provogue  (Europe, Australia, New Zealand) / Eagle Rock (North America). The album will be released on Limited edition 180g 2LP Brown vinyl, 2LP 180g Black vinyl, CD and digitally – you can pre order it here.

When ‘High Water I’  was released in August 2018 it was the sound of old friends coming together in a union of rock ‘n’ roll, psychedelic blues, rasping Americana and late-night storytelling.  The band was pulled together by guitarist Rich Robinson, it continued a storyline he began in The Black Crowes with guitarist Marc Ford and bassist Sven Pipien. Meanwhile, vocalist John Hogg shared Hookah Brown with Robinson as keyboardist Matt Slocum and drummer Joe Magistro both joined him for solo records and tours over the years. Their first official live outing was in January 2017 at the Gramercy Theatre, New York City.

The album reached the Top 40 Billboard Charts and was met with widespread acclaim from Rolling Stone, Relix, Guitar World, Planet Rock, MOJO Magaine, The Independent, The Daily Express and Classic Rock Magazine named it #7 in their albums of the year. Tours across the US and Europe followed including shows with Gov’t Mule, The Avett Brothers and Blackberry Smoke with the band also taking their first trip to Japan in January this year.

‘High Water II’ picks up where the band’s studio debut left off, much of the album was written during those early recordings at Dark Horse Studios in Nashville which is why the album feels like a perfect continuation of its predecessor. Talking about the flow between the two albums Robinson explains; “Both records are part of a collective journey. I chose the sequence specifically for each record. I wanted ‘High Water l’ to introduce us to the world and the world to us. With ‘High Water ll,’ I wanted to get a little deeper. To take people places they may not have expected to go.”

Following the end of their 2018 European tour, Robinson had principally written 3 new songs – ‘Gimme Something’, ‘Leave It All Behind’ and ‘Life Is A Landslide’ –  and it was during this tour where they took the opportunity to head into Rockfield Studios to continue working on the album.  The farmhouse studio, based in a village near Monmouth in Wales has produced classic albums such as Queen’s ‘A Night At The Opera’, Oasis’ ‘(What’s the Story) Morning Glory’, Coldplay’s ‘Parachutes’ as well as albums by Black Sabbath, Roy Harper, Rush, Iggy Pop, Bauhaus, Paul Weller, Hawkwind, Donovan and The Cure.

The themes that run through the record are those of human experience, “We as humans, will always wrestle with universal themes,” Robinson says. “I think there’s light and dark around us at all time. I think they’re both necessary to see the contrast that helps us see the peaks and valleys of life.”

Like its predicessor, the first song on the album kicks off with a rocket on the roaring Robinson/Hogg penned ‘Sooner Or Later.’ “This is a true record of us all playing together live as a band in the studio,” remembers Hogg. “The song is like a description of rushing through life at hyper-speed. I remember thinking about Son House doing ‘John The Revelator’ because the music was so hypnotic.”

Talking about the songwriting process and what drives him, Robinson adds, “I always try to write a better song, and be a better musician.” The album reflects the band as a whole with Hogg co-writing seven songs with Robinson, which include the Stonesy groove of ‘Gimme Something’, the funky blues of ‘Doesn’t Really Matter,’ the Dylan/Bowie inspired lyrical flow of ‘Turn It Around’ – “I feel like an older version of myself telling the younger version of me to watch out, keep my eye on the ball. I guess that’s time travel, in a sense, with a grumpy spirit guide lurking somewhere in the background,” Hogg explains – and late night after hours shimmer of album closer ‘Where Is This Place’.  Talking about the latter Hogg adds; “This is another song born out of the moment. It is very difficult to listen back to something totally free and then give it a label. This was an improvisation based around a central chant. It now sounds to me like a stand-off. Love can be like that. And war can too. The meaning of things change over time. It’s a great song by a great band in a spectacularly charged moment. The best moment in the history of moments.”

The wholly Robinson written songs include a trio together in the first half of the album and ‘Life Is A Landslide’ in the second half; the roots rocking ‘In Here’ which lets the listener know that it’s ok to feel afraid, happy and sad as the chorus testifies, “We stand alone in our creation, and lay it out for you, So come on in I’ve got some answers, tell you what to do.” This leads into ‘You And I.’ Awash with beautiful melancholy, it reflects on burdens blocking  our way but still managing to pave a way to the stars and builds into a soaring and swirling climax and into ‘Mother Storm’ which whips you through laidback Americana through blistering solos and luscious keys.

The human element of the album reflects the personal significance each listener attached to it. Talking about this Robinson muses, “It’s all personal for anyone writing or listening.  If you like the band, the music, the lyrics or if you’re writing these songs there is an intimate relationship formed with the work. A song, a lyric can mean 7 1/2 billion different things to people around the world because everyone around the song, writer or listener, will have their own individual life experiences and perspectives that color and assimilate the song into their life experience.  It’s pretty amazing if you think about it.”

The country-tinged ‘Lost Boy’ was co-written between Ford and Robinson and features special guest Alison Krauss, who supplied vocals and fiddle. “Marc had ‘Lost Boy’ but he felt it was missing something, so I helped write the chorus,” Robinson remembers.

The Magpie Salute is a landscape with limitiless possibilities and they have the ability to swoop and delve into a myriad of textures and emotions. Their live repertoire alone highlights this as an impressive cannon which means they can perform as a 10 piece, 6 piece or a trio. The collections of songs spans The Magpie Salute, The Black Crowes, Rich Robinson solo material and cover versions meaning that no two shows are the same. Something that will keep fans wanting to come back time after time. “I think it definitely keeps it moving and fresh for us as a band. I think the fans that come to the show expect that they will be at a different show hearing different songs every night,” says Robinson.

Prior to the announcement of ‘High Water II,’ Robinson revealed, he has also teamed up with Gretsch to create a new G6136T-CSTRR Rich Robinson “Magpie” Signature guitar. “Ever since I was a kid, I’ve always loved Gretsch guitars,” Robinson says. “From Neil Young and Stephen Stills to Steve Marriott and Malcom Young, these guitars have always piqued my imagination. Sonically and visually, Gretsch guitars have always been unique in the musical landscape. To have my own signature Gretsch is an honor, and the Magpie is the combination of all of my favorite elements of Gretsch guitars.”