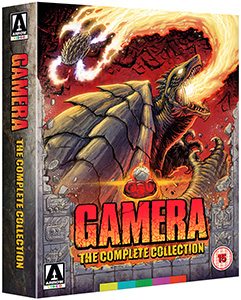 For the first time ever worldwide, Arrow Video has collected together all twelve tales of the adventures of everyone’s favourite titanic terrapin, in one deluxe Blu-ray box set. Japanese icon Gamera first appeared onscreen in 1965, and gave homegrown creature-feature favourite Godzilla a run for his money, going on to become one of the most beloved movie monsters of all time.

This deluxe, limited edition collectors’ set traces the decades-long evolution of Gamera, from the “friend of all children” in his more light-hearted earlier films, to the Guardian of the Universe in the groundbreaking 1990s reboot series, often hailed as three of the best kaiju films ever made.

GAMERA: THE COMPLETE COLLECTION comes in beautiful special edition packaging, housed in a large-format rigid box, fully illustrated by Matt Frank, and features 8 Blu-ray discs with all twelve uncut original Japanese versions of the films, 4K restorations of the critically acclaimed Heisei trilogy, as well as hours of new and archive bonus features, and expert commentaries.

The set also includes a lavish 120-page hardback comic book including a full-colour reprint of the 1996 Gamera comic series, as well as a perfect-bound 80-page book featuring a new retrospective on the series. With even more extras to be announced, this is an absolute must-have for fans of the flying, fire-breathing phenomenon.

GAMERA: THE COMPLETE COLLECTION is released by Arrow Video, on Limited Edition Blu-ray on July 27, 2020, at £149.99 (with a special early bird price on the Arrow website at www.arrowfilms.com).