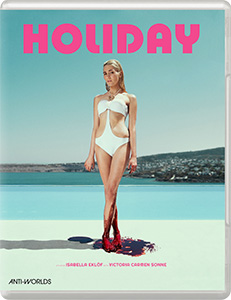 Sascha (Victoria Carmen Sonne) is a young and attractive woman caught up in the seedy world of drugs. The trophy girlfriend of a drug lord, she finds herself physically and mentally abused by almost every man that she comes into contact with.

This changes when she inadvertently bumps into a friendly gentleman while holidaying with her drug lord partner/boss/abuser and his gang of associates on the Turkish riviera.

Realising that that she doesn’t have to be an emotional and physical punchbag all the time, Sascha decides to pursue her relationship with her new found friend, despite the inevitable heartache that surely is coming her way.

Directed and co-written by Isabella Eklöf, Holiday is a stark and sterile, yet beautifully photographed, intimate look into a singular point in time of an oppressed young woman who discovers that she is far more than she is being told what she is.

The narrative is more akin to a fly on the wall documentary; capturing moments in time as Sascha goes about her day to day life. This often involves such mundane acts as watching the television, of which a static camera captures her doing so for many uneventful minutes.

Yes. The rape scene. Surely the most talked about point whenever the subject of this movie is brought up.

I thought I’d never see a rape scene as shocking as the one in Irreversible, but this one now takes its crown. Filmed with the same static camera technique, this pushes the limit as to what censors will allow, not only showing the entire rape, but also showing the mans erect penis as he finishes the act by ejaculating over Sachas face. All placing the viewer to one side of the couple, watching helplessly as the man once again gets what he wants, treating the woman as no more than a piece of meat for his pleasure.

Despite the above scene garnering the majority of the attention, there is more to Holiday than an explicit sex scene. The aforementioned beautiful cinematography is a juxtaposition to the dark grimy world that the drug lord frequents. The Turkish riviera is shown in wonderful bright and vibrant colours, all helped by an eye-popping transfer on this Blu-ray release.

I’m already discovering that these new releases by Anti-Worlds may well be divisive in their content (see my review of Relaxer), but at the same time I’m extremely pleased that movies which will more than likely never be shown at your local multiplex are now getting a release worldwide, complete with fascinating special features which give you the opportunity to learn more about the stories behind the story, while also getting to know the filmmakers and their motives for the work they do.

Holiday plays out like an uncomfortable fever dream holiday movie, with many moments of tranquil inactivity interspersed with moments of shocking violence. Its narrative is slow, and at times almost comes to a dead stop, but somehow it has the ability to keep you watching as to what (if anything) may happen next.

A divisive movie for many reasons, and one which will more than likely alienate a lot of viewers. However, thanks to Anti-Worlds, this is now out there in its best possible version so that you can make your mind up about it.

Review by Dave from a disc kindly supplied by Anti-Worlds.

Review: In The Line Of Duty Gamera: The Complete Collection