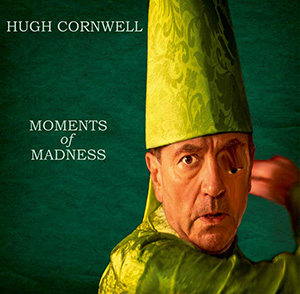 Hugh Cornwell returns with his sensational and highly anticipated tenth solo album Moments of Madness with ten outstanding tracks that are set to stun. The album is released on Friday October 7, 2022. The album is available to pre-order from 10am on Tuesday April 19th from  www.hughcornwell.com.

To dovetail with the new album, Hugh will embark on a 21-date nationwide UK tour from November 4 to December 3, 2022. A 48-hour ticket pre-sale will start at 10am on Tuesday April 19 via www.hughcornwell.com and www.thegigcartel.com. Tickets will then go on general sale on at 10am on Thursday April 21 via www.hughcornwell.com and www.thegigcartel.com.
Widely regarded as the poet laureate of the punk era (from his early career fronting the Stranglers to his transition as a solo artist), Hugh Cornwell has built a substantial and singular body of impressive solo albums. His tenth solo opus, Moments of Madness, continues his illustrious output by experimenting with musical genres as his enviable reputation as a wordsmith resounds across this album’s songs.

Self-produced, and playing all of the instruments himself, Moments of Madness’ ten incredible tracks finds Hugh flexing his musical muscles with a stripped down, offbeat, reverberating sixties vibe ringing from the  seductive melodies and lyrically distinctive perceptions that are indelibly stamped with Hugh’s trademark imagination. Vocally and lyrically a career-best, Hugh has never sounded so good on his tenth solo album.

A high watermark and a modern-day masterpiece, Moments of Madness is being tipped as the most significant album of Hugh’s career.
Four years since his previous remarkable solo album Monster, the opener, and first single, Coming Out of the Wilderness surfs an edgy and explosive sixties sound with a heavy Duane Eddy guitar twang as Hugh declares, “I’m coming out of the wilderness, learnt how to throw a bowie knife. Ran into fair-haired maiden’s out there but didn’t take no wife.”

On the new album, there is no mistaking Hugh’s distinctive vocals and lyrical mastery as the consummate storyteller. He returns with his inimitable observations on the art of survival in these challenging and turbulent times.

Says Hugh, “It’s like I’ve got a stew pot of sounds where I’ve put in a bit of Joe Meek, a bit of Lou Reed, a flavour of The Doors, a bit of this, a bit of that and I mix it all up and it tastes good. I’m like a cook when I make records in that I don’t follow any recipe.”

“I don’t mind different types of jewellery, show it to me, just feel free’, could be I’m missing the artistry” opines Hugh on Red Rose – a song about the bewildering trend for tattoos revealing a record of many gleaming lyrical gems.

Hugh’s ecological message on Too Much Trash also resonates loudly on another irritating topic close to his heart as he eviscerates the thoughtless actions of the devil may care consumer society who needlessly drop litter everywhere. “We’re heading for a crash. We got too much trash.”

The surreal carousel of psychedelic motifs spinning from this sixties stew of sonic moments (of madness) echo down the years as Cornwell delivers his unique humour in the pithy lyrics for a safe port in the storm close relationship on I WannaHideInsideAya.
Looking for You reveals a Jim Morrison inspired vocal over this song’s spooky atmospherics, and the semi-autobiographical and upbeat When I Was a Young Man opens a can of insightful, wistful emotions “As years go by and friends, they die they leave me living slow,” Hugh sombrely sings as he reflects upon his family and friends.

Hugh explains his motivation to the monumental title track Moments of Madness that musically adventures in mixing a dash of dub as he strums a lockdown rhythm to this devilish groove. ” The Clash did reggae so what’s wrong with me doing it? I loved playing the bass on this track.” On the album’s title track, Hugh’s lyrics again have a finger on the pulse of our times. “Looking like the fog’s gonna finally clear. Switch on all the lights at the end of the pier. Tidy up your makeup and shampoo your hair. Have a little party but nobody’s there.”

Moments of Madness is multi-layered with serious messages, acute analysis, and witty observations in fun-filled lyrical and musical eccentricity. On Lasagne Hugh tells the story about his Italian friends who live in Mexico and make the best lasagne he has ever tasted. As always, Cornwell communicates with a biting humour in all the right places.

Hugh’s cautionary tales about matters of the heart are revealed in his inimitable coded style on Beware of the Doll. “You think you’re listening to love. You’re sinking from a foot above.” And the more personal album closer Heartbreak at Seven which was the first song that Hugh recorded for this album. Illustrious, multi-talented and a legend, with Moments of Madness, Hugh Cornwell has produced a timely and thought-provoking masterpiece for our times.