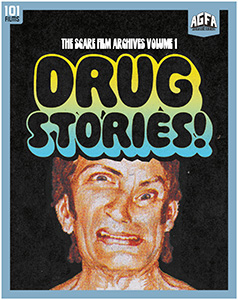 I remember as a kid here in the UK in the 1970’s watching public information films, then rewatching them many years later as an adult and thinking WTF!?

The likes of The Green Cross Code man and an unintelligible cat called Charlie both told me how to stay safe while crossing the roads and make sure to avoid talking to strangers etc.

The darker ones involved kids playing near a river and drowning, all accompanied by a deep toned somber voice telling you that this was dangerous.

As far as warnings against drug taking went, in the 1980’s some of the cast of the popular TV show Grange Hill informed us to “just say no“. They even made a song about it, AND went to America to meet the President.

None of the above though comes close to what I witnessed while watching The Scare Film Archives Vol.1 – Drug Stories. The 2K preservations of these original 16mm prints that were shown to school children across America truly have to be seen to be believed.

This collection is the type of thing best watched with mates while having a few stiff drinks, or if you’re feeling naughty taking a few drugs too…be warned though; “my culture just smoked marijuana…until we got on horse!” according to one of the professionals on this.

Whether kids actually took notice of these is debatable, what isn’t however is how entertaining they are to watch now. Are they dated? Sure. But boy oh boy they are definitely addictive viewing.

Just the sort of thing you didn’t know you wanted to watch…until you watched it.