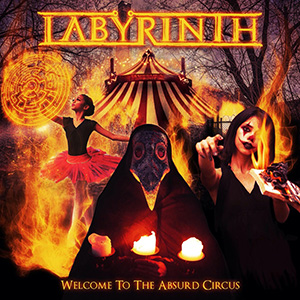 Italian metal masters Labyrinth have announced the January 2021 release of their new studio album, ‘Welcome to the Absurd Circus’, on which uptempo power metal with unforgettable hooks, epic prog infused rock and memorable melodic songs combine on another milestone record for the group.

Initially formed in 1991, the second Labyrinth album, ‘Return to Heaven Denied’ (1998), is a recognised classic of its type. Embraced by fans and the hard rock media alike, it elevated both the upward trajectory of the group and the Italian scene as a whole. A handful of subsequent full-length releases culminated with ‘Return To Heaven Denied Pt. II – A Midnight Autumn’s Dream’ in 2010.

‘Welcome To The Absurd Circus’ sees the reinvigorated Labyrinth surpass that effort with an album that is not only a must hear for their fans, but for progressive and power metal followers in general.