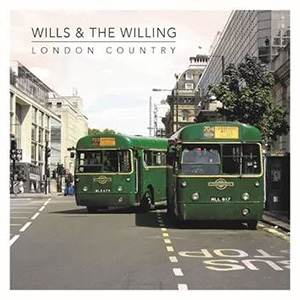 It has been two years in the making and now LONDON COUNTRY, the fourth album from Ian Wills and his band Wills & The Willing was released on Friday 9th October.

The first single from the album, released in the summer, ICEBERG is already enjoying chart success and radio play across Europe and USA.  Now his 10-track album is ready to be released next month, which includes friends Petr Cech on drums and even a spot of Vinnie Jones. The new single IDAHO is also released the same day.

Wills has always been incredibly honest in his lyrics and this is just one reason why his confrontational and often stark use of language has elevated him to the position of one of Britain’s premier spoken word artists.

Transferring these skills to a musical canvas with his band Wills & The Willing, he has reaped praise from across the board including BBC Radio 2’s Janice Long, and even legendary guitarist Les Paul.

The new songs with an Americana/Country genre with a Folk overtone, dig deep into a rich vein of cinematic influences, sometimes brutal, sometimes apocalyptic, always personal, and never hiding Ian’s own vulnerability that brings the stories to life.

Ian’s explains the inspiration behind the tracks of LONDON COUNTRY…

“Clint Eastwood inspired; of all the great westerns he has made the one that touched me the most was Unforgiven. No matter what bad we have in our blood the good can shine.”

“Woody Guthrie once said, “anything more than three chords is showing off”. Truth hurts, lies kill, if you tell the truth the worst that can happen is the truth.”

“You can fall in love in 10 seconds and out again in another 9, then try all you can to fall back in love knowing no matter what you do the magic is lost, yet you hang on in hope.”

“Is the stutter when you see someone and want so much for them to fall in love with you, yet no matter what you do you remain hidden in their vision.”

“Knowing your own failings yet believing you can be the difference in preventing the person you love from losing themselves and drifting into isolation and knowing that the price is high.”

“Tom Jones singing Delilah is the greatest murder ballad I have heard. With Midnight Train I thought does he kill her or is he stalking her, the listener can decide.”

“I was invited by a dear friend for dinner at a well-known casino in London. Watching the tables being played I wondered how many lives would be affected by good or bad luck. The house always wins was what resonated, and that it’s the hope that kills more than the despair.”

“Rage and hate. Rage of a man who snaps because the life he has built was found to be meaningless, and the hate of men who kill for no other reason than the colour of your skin. Rage is punished on death row, hate never punished, so I speak Emmett’s name as a reminder of injustice.”

“You have true love in your hand, yet you let it slip because you didn’t know what you had until you lost it.”

“The last days at the bedside of my sister as she lost her fight.”

With the autumn release of his new album and second single, Ian will be taking The Willing on tour with him in the coming months to perform the new songs, with dates to be announced soon.

Ian Wills said: “There is always some part of me in the songs, the good and bad come out in equal measures, I seem to never forget my failings only my victories as a poet and lyricist. That helps keep me searching and I do write most days, always looking for an answer to a question yet to be asked.”

Ian added “We all find ways to let light into others if we see that the dark is greater than the light.”

Review: Twins Review: Helmut Newton: The Bad and the Beautiful

New single and video from Crostpaths