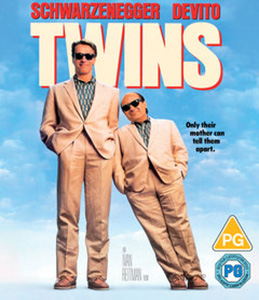 While Arnold Schwarzenegger and Sylvester Stallone battled for cinematic action movie supremacy during the 1980s (my vote is naturally with Sly), it was Arnie who unequivocally came out on top when it came to dipping their toes into the world of comedy movies. Twins being a prime example of how Arnie could charm an audience as well as thrill them.

The set up for Twins is simple: short, fat, bad tempered and conniving Vincent (Danny DeVito) is unexpectedly approached by tall, muscle bound, easy going and honest Julius (Arnold Schwarzenegger) who claims to be his long lost twin brother. So begins a series of events where they attempt to track their mother, all while their various differences are explored in a variety  of situations which mostly revolve around Julius trying to keep Vincent on the straight and narrow and out of trouble with of people whom he has previously annoyed.

While not a consistently “laugh out loud” movie, Twins has enough gentle humour to keep me smiling throughout whenever I watch it, especially seeing Arnie play against type while trying to protect his onscreen twin.

The chemistry between the 2 leads is palpable, so much so that they were reunited for the 1994 movie Junior (read the review by Chris here), all while being ably supported by a cast which includes Kelly Preston, Chloe Webb and David Caruso.

There are no huge narrative surprises and you can pretty much guess how it is all going to end before the 1st act has finished, but the journey to the inevitable finale is a very enjoyable one which will leave you smiling long after the end credits has rolled.