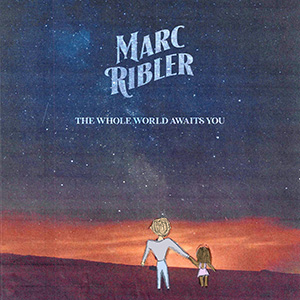 As society prepares to re-emerge from the suspended animation of the past year, thoughts of the simple pleasures we’ve missed help motivate many of us. While mostly written and recorded before the pandemic, it’s that type of hopefulness for brighter days ahead which informs Marc Ribler’s striking new solo album The Whole World Awaits, releasing Friday, July 16 on Wicked Cool Records.

“I started to feel that the world was not coming to an end, more that it was just a major healing crisis,” says Ribler of the early quarantine era in spring 2020, when he made his way back to finish the album he’d recorded the bulk of in February 2017. Most of these twelve new original songs, written between 2005 and 2020, were tracked in the studio during a brief respite from his work as guitarist and musical director for Little Steven & The Disciples Of Soul’s world tour, a multi-year jaunt which ended just months before the pandemic.

Upon hearing the early mixes, Stevie Van Zandt offered to co-produce and release the record on his Wicked Cool label. “Working with Stevie feels like a gift for all the years of blood, sweat and tears,” says Ribler. “It’s like taking a master class on how to conduct yourself musically, professionally and personally in a business that will chew you up and spit you out without thinking twice.”

The mid-tempo rocker “Shattered” was released in late February as the first single from the album. The shimmering tune co-written with Marc’s Nashville friend Christina Aldendifer echoes the sound of The Byrds and Tom Petty at their best. It was featured in an exclusive premiere by American Songwriter, which called it “a driving East Coast heartbreak rocker oozing West Coast Laurel Canyon style.” The single made a splash not just digitally but in a physical version on seven-inch vinyl with the Hollies-esque non-album B-side “Hand Me Down.” It immediately entered heavy rotation as that week’s Coolest Song In The World on Little Steven’s Underground Garage satellite SiriusXM channel and worldwide syndicated terrestrial radio show.

Future single “Fly Away” is an example of a Ribler original on the album which Van Zandt helped shape into its final form. “It had more of a California singer/songwriter vibe and was more piano-driven when I first played it for Steven. He suggested starting it with acoustic 12-string guitar, and making that and the slide guitar be the foundation. Steven wrote the anthemic outro at the end of the last chorus. I felt that was the icing on the cake!”

Album closer “This Is How The Song Goes” is both the artist’s own and producer Stevie’s favorite track on the record. Written in the wee hours after a day of work spent scoring an independent film, some subtle but haunting psychedelic touches give the final recording a late ’90s alt-songwriter feel not unlike peak period Elliott Smith or Brendan Benson.

The last song written for the project was the Latin-flavored “Manzanillo,” which gives the middle of The Whole World Awaits a color and texture very different from the rest of the album. “This is a true pandemic song and production,” explains Ribler. “I recorded an acoustic guitar, vocal and a simple keyboard part. Then I had my dear musician friends and brothers record their parts at their home studios and send them back to me via the World Wide Web. My friend Tom Bowes, lead singer of Tower Of Power, added some background harmonies. Safe, healthy and creatively productive in the heart of a crisis.”

Prior to his role as musical director and guitarist for Little Steven & The Disciples Of Soul over the past five years, Marc served in the same capacity for Darlene Love and longtime Rolling Stones backing vocalist Bernard Fowler. He has performed with rock and soul royalty such as Paul McCartney, Bruce Springsteen, Carole King, Elvis Costello and Bettye Lavette.

Marc has been in the music business since he was a 14-year-old New Jersey kid. “I started out playing the dive bars, the high school dances and all the storied Jersey shore Rock & Roll haunts like The Stone Pony in Asbury Park.” He graduated to songwriting and production work, getting his first cut as a writer at age 23, then a development deal with RCA Records which went south when the label was purchased by BMG. He co-wrote several tracks on the self-titled 1992 RCA debut album by AOR rocker Mitch Malloy, including two Billboard Hot 100 singles, one of which was the Top 20 Rock hit “Anything At All.”

When live shows return, the heart of Ribler’s touring band will be the same core of seasoned vets he brought on board to anchor the latest incarnation of The Disciples Of Soul: Rich Mercurio (Sara Bareillis, Idina Menzel) on drums, Jack Daley (Iggy Pop, Janet Jackson) on bass and Andy Burton (John Mayer, Rufus Wainwright) on keyboards.

Make sure to listen/watch my interview show with Marc Ribler.

MIDNITE CITY release new single & video ‘They Only Come Out At Night’ Review: The Virtuoso