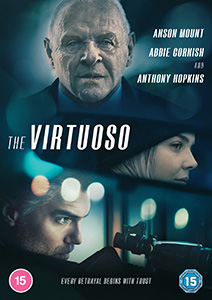 The titular Virtuoso (Anson Mount) is an unnamed (as are all the characters in this film) professional assassin who is given an assignment by his boss ‘The Mentor’ (Anthony Hopkins), but the only details are a time and location where to find the target.

Arriving at a remote diner frequented by a handful of patrons, ‘The Virtuoso’ must find a way to deduce the correct identity of his target and carry out his orders to eliminate them.

Slow paced and relying on a voice over by the main character to further the narrative during most of its running time, The Virtuoso is definitely not a nail biting action/thriller peppered with shootouts.

However, there was something intangible about it that kept me interested until the very end, despite a very ‘one note’ performance from Anson Mount which made him stand out like a sore thumb whenever he was in any sort of company…surely not a character trait a hitman would want when trying to blend into the background!?

Anthony Hopkins, while front and present on the cover image, only plays a minimal role, largely sat behind a desk and waiting for one of his 3 phones to ring. It’s still always a pleasure to see him onscreen though.

Having said all of that, I still wanted to know how everything played out. Would the right target be found? Is everyone who they appear to be? Why does The Mentor just sit in silence waiting for one of his phones to spring to life?

The Virtuoso is one of those films that I highly doubt anyone would put into their top 50 of the year, but it could, if you’re in the mood for it, be a pleasant enough experience to spend an evening with.

Marc Ribler releasing new solo album ‘The Whole World Awaits You’ on July 16th Review: Someone to Watch Over Me