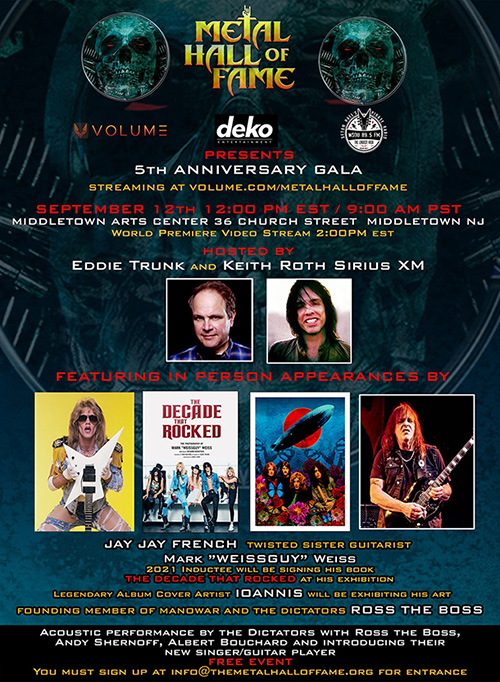 The event will be hosted by radio/television personality Eddie Trunk and DJ Keith Roth (SiriusXM’s Ozzy’s Boneyard and Hair Nation). Guests scheduled to appear in person are Jay Jay French (Twisted Sister); 2021 inductee Mark “WEISSGUY” Weiss, who will sign copies his book The Decade That Rocked; celebrated drum virtuoso/Metal Hall of Fame founder Pat Gesualdo; legendary album cover artist Ioannis, who will be exhibiting his original album cover artwork from Fates Warning, Quiet Riot, Deep Purple, Yngwie Malmsteen and Uriah Heep (my interview with Ken Hensley), among others; and founding member of Manowar and The Dictators’ Ross The Boss.

The Dictators, featuring Ross The Boss, Andy Shernoff and Albert Bouchard, founding member of Blue Oyster Cult, will introduce their new singer/guitar player with a special acoustic performance at the event. Additionally, a special Metal Hall of Fame artwork and signed memorabilia exhibit featuring numerous Metal Hall of Fame inductees will be on display.

The live pre-show event will be held at the Middletown Arts Center, located at 36 Church Street in Middletown, NJ and will begin at 12 noon EST. Followed by the debut of the 2021 Metal Hall of Fame Induction Gala, hosted by Cathy Rankin, will take place at 2 p.m. EDT and will be available to viewers throughout the world at Volume.com/metalhalloffame.

“The world premiere of the pre-recorded 2021 Metal Hall of Fame Induction Gala is a great way for all hard rock and heavy metal fans around the world to take part in our annual event,” says Metal Hall of Fame spokesperson Owen Kennedy. “Unfortunately, we had to do a recorded video gala in 2021, as a result of Covid 19 lockdown restrictions. We are excited that as of now, the annual 2022 Metal Hall of Fame Gala will be back to normal in January and held in person.”

The live event is presented by Deko Entertainment, Volume.com and 89.5 WSOU. To attend the live pre-show, sign up at info@theMetalHallOfFame.org to reserve a free ticket for admission.

The 2021 Metal Hall of Fame Video Inductees are: