More Than Likely: A Celebration of The Likely Lads

Whatever did happen to those likely lads?

Spinning off from the BAFTA-winning 1970s sequel to the incredibly popular 1960s sitcom, The Likely Lads(1976) feature film starred James Bolam and Rodney Bewes as Terry Collier and Bob Ferris, two life-long friends with vastly different outlooks on life. This feature presentation has been beautifully restored from original film elements.

But that’s not all…Bob may memorably bemoan that ‘in the chocolate box of life, the top layer may have already gone’, however, the folks at Network have discovered a secret stash of orange crème…in the form of two recently recovered episodes from the original BBC TV series, thought lost for over five decades!

Screening for the first time, episodes A Star is Born andFar Away Places, will follow the feature film presentation. To round off an already exciting evening,Likely Lads creators Dick Clement and Ian La Frenais will join us for a very special Q&A session. 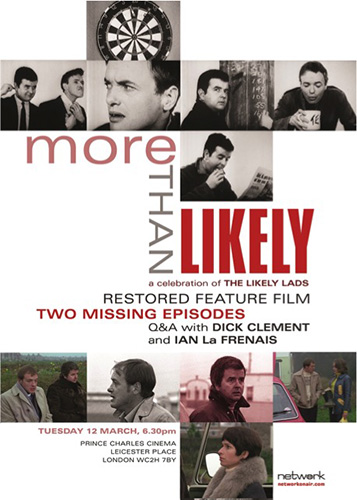 The Likely Lads (including the missing episodes) will be available on Blu-ray and DVD from Monday 18thMarch – copies of the new release will be exclusively available for early purchase at the event.

Starring Rodney Bewes and James Bolam the film charts Thelma’s (Brigit Forsyth) continued annoyance at her husband Bob’s (Bewes) disruptive friend which shows no sign of abating. But when Terry (Bolam) lands himself a new girlfriend Thelma sees her chance to finally get Terry married off and out of her and Bob’s life forever! Her solution of touring the north of England in a caravan, however, leaves a lot to be desired…

A Star is Born: With one eye on a £25 prize and the other on Rhona the barmaid, Terry enters himself and Bob as a singing duo in a talent night at the local: but the lads can’t agree on the choice of song, or who gets first billing in the group name…
Far Away Places: The lads are contemplating their summer holiday, but lack of money is a problem: as is the choice of destination. Bob favours the continent, while Terry is all for tradition and can’t be persuaded to go abroad…

Followed by a Q&A with creators