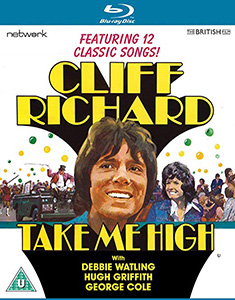 Cliff Richard sings his way through the streets of Birmingham, including ‘Brumburger’: an earworm of a song about a Birmingham burger joint.

Reflect on that for a moment: Cliff Richard sings a song about a Birmingham burger joint. That alone would hook me into watching Take Me High, and if you’re thinking the same, then prepare yourself for when it is released on Blu-ray, DVD and VOD by Network on March 18th.

Cliff plays Tim Matthews; an ambitious financier who is promised a job in New York but ends up in the middle of the UK in Birmingham to put pressure on a struggling restaurant.

Never one to let things get him down (and if they do, he’ll sing a song about them), Tim eventually finds romance (cue happier songs) and discovers that his vocation is running an upmarket burger joint…and an opportunity to sing ‘Brumburger’.

You know in advance what you’re going to get with a Cliff Richard movie: no violence or bad language, regular songs and a happy ending. All that usually changes (apart from the songs of course) is the backdrop, and while early 1970’s Birmingham resembles nothing less than a sea of concrete and rain, it helps Cliff to shine even brighter as he he makes his way through its streets in a series of jaunty outfits…one particular velvet jacket and huge bow tie combination had me transfixed to the screen.

If you’re a fan of Cliff then this Blu-ray release will please your eyes as well as your ears, as it gives a movie that has been unavailable on home video for quite a while a new lease of life…and makes those concrete buildings of Birmingham look even greyer than they’ve ever done before.

Vintage fashions and classic cars on display, accompanied by dialogue cornier than then the contents of the Green Giant’s toilet bowl, Take Me High also has something for those who may not be a fan of Cliff or his songs.

Take Me High is released on 18th March 2019, and you can buy it by clicking HERE. ALL money raised by purchasing from Amazon via our website is given back to our listeners and followers in upcoming competition prizes. The more people buy, the bigger our prizes.

Review by Dave (host of 60 Minutes With) from a disc supplied by Blue Dolphin Films from Network on Air.

ABC of gaming: February 2019 More Than Likely: A Celebration of The Likely Lads