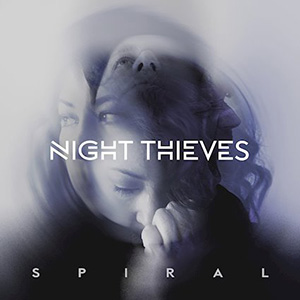 NIGHT THIEVES were formed at the late 2017 and feature Jess Moyle (Vocals), Paul Andrew (Guitar), and Rick Hunter-Burns (Bass). The Londoners pull in from Royal Blood, Architects, Biffy Clyro, Spiritbox and Incubus, but the band have certainly crafted their own sound, aided by their impressive and distinctive use of gigantic drop-tuned riffs and ultra-hooky vocals lines.

The trio made their live debut at the end of 2018 and since then, the rising rockers have amassed a solid following by frequently playing shows throughout the nation’s capital. The band’s debut EP, Battle Cry, with acclaimed producer Jason Wilson (Dinosaur Pile-up, Reuben, JOANovARC) spawned strong praise from the underground with keen support from Moshville, Divide And Conquer, Down The Media, and many others.

Upon the release of Battle Cry, the band were on a roll with many shows scheduled with a slot supporting Marisa and the Moths among them, before Covid hit the world. However, NIGHT THIEVES continued to push on and commenced work on their follow-up EP, Spiral, with producers Paul Visser (Black Orchid Empire, Hawxx) and Kev Yates (Forever Never). The band remark about the EP and how they had to overcome challenges brought on by the Covid-19 pandemic: “Work on Spiral began the moment lockdown happened; we did this remotely with producer Paul Visser. We focused on developing the riffs, vocal melodies, and getting the tracks to really flow. When we finally got into the studio, we were really pushed by our engineer Kev Yates, and everything clicked very quickly and to great effect”.

Spiral is darker and heavier than their debut, but their new record is much more anthemic and possesses an arsenal of monstrous choruses. Lyrically, the release focusses on the anxiety and vulnerability felt during the past twelve months. The EP is undoubtedly the band’s best work and is destined to see them climb to new-found heights.