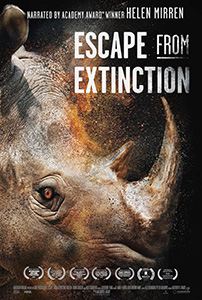 Narrated by Helen Mirren, Escape From Extinction uses rare footage of endangered animals, and interviews with the world’s leading animal welfare and conservation specialists, to highlight the many species that are in danger of disappearing forever from the face of planet Earth.

Exploring the work of zoos and aquariums across the globe as they race to protect and preserve animals from all seven of Earth’s continents, examples are given of the many species that are already extinct, alongside those that may soon be joining them if immediate action is not taken.

With Earth currently being threatened in what scientists are calling a ‘Sixth Mass Extinction’, it is up to the critical efforts of major zoological organisations to preserve millions of species on the verge of disappearing forever.

This is made even more difficult by a section of ill informed animal activists whose actions can often result in more unintentional harm and long term suffering for the animals, showcasing that communication and information sharing between all parties is essential for the survival and ongoing breeding opportunities for these rare species.

The above paragraph of course shows that Escape From Extinction doesn’t exactly “sit on the fence” as regards to where its main narrative bias is set, showing little (if any!) positive footage of what animal activist parties have achieved over the years.

While slanted in its presentation and views, there is one message that it clearly gets across that everyone should be aware of and acting upon: we have already lost too many species in recent human history and should be informing ourselves about what can be done to help preserve the ones that are left and allow them to continue to survive in the most natural ways possible.

Review by Dave from a streaming link kindly supplied by Kaleidoscope Entertainment via The Warrior Agency.