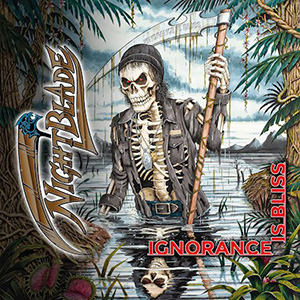 UK alternative rock foursome NIGHTBLADE are back with a fiery new album, Ignorance Is Bliss, out Friday 4th December. The Midlanders have also just dropped a new video for the track, Stop (see below).

Rockers NIGHTBLADE were initially formed in 2010 and soon released their much-praised debut album, Servant To Your Lair. Widespread touring throughout the UK and support from Metal Hammer magazine quickly followed. The quartet continued their ascent with the release of their sophomore album, Closer To The Threshold, which landed in 2013. The release garnered the support of Powerplay and also introduced the band to the Japanese market with the country’s largest rock magazine, Burn, to back the Brit rockers.

NIGHTBLADE spent the next two years playing a host of successful shows across the country, sharing stages with highly regarded international acts such as Snakecharmer, Wolfsbane and Diamond Head. The band then revealed their EP, Crisis Has No Prejudice, in 2015 to high acclaim once again. The following year, the foursome decided to take some time out and went into hiatus.

NIGHTBLADE, however, are now set to return with the release of their newest album, Ignorance Is Bliss. With a refreshed, revised and re-energised sound, the formidable rockers are ready to etch their mark on proceedings. The band’s new album heralds a new venture, nudging towards the likes of Alter Bridge and Shinedown. Rammed with powerful riffs, engaging melodies, anthemic choruses and loaded with groove, the record is both inspiring and poignant. With further singles and the promise of shows in 2021 on the horizon, NIGHTBLADE are back.