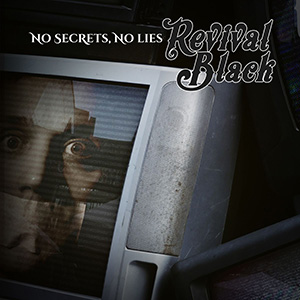 Liverpool’s Revival Black, are delighted to announce that their new single No Secrets, No Lies, is now available worldwide, across all digital download and streaming services and is accompanied by a video shot in Snowdonia National Park, Wales.

Guitarist, Alan Rimmer, explained, “This song was one of the first that we worked on together. The song is about coming out of a dark period emotionally; about putting your trust in someone and for them to then break that. Its defiantly one of the darker songs from the album“.

“Musically, the main lick that starts the song was something that I came up with from old style double stop blues riffs and this set the tone for the vibe of the song. The verses went through several versions but we resorted back to the original stabbing idea you can hear. The chorus is the first idea that came about as we wanted a driving chord progression that let the vocals tell the story, Adam added a lead lick over the top of the chorus that added a texture that allows the chord progression to flow.

It’s a cool song to play, and again lets Dan open up those awesome pipes of his.”

Revival Black (previously known as ‘Black Cat Bones’) are a classic sounding hard rock band, striking out of the cultural heartland that is Liverpool, England.

They have recently signed to leading management agency, TMR and plan a sonic incursion on the public with their forthcoming 10-song debut album, slated for release in Oct 2019.

Following the addition of vocal powerhouse, Dan Byrne, the band have been revitalised and re-imagined, bringing a whole new attitude and drive that warranted a new name and fresh identity. No Secrets, No Lies is just the fourth single to be released under their new name of Revival Black and will feature on their forthcoming debut album.