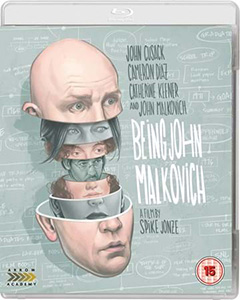 Now 20 years old (can you believe it?) Being John Malkovich was, and still is, a ‘one off’ kind of film. Very surreal, yet understandable. This was the first script made into a film by Charlie Kaufman, who is now seen as one of THE American writers of modern times. Directed by once pro-skateboarder Spike Jonze and actually produced by John Malkovich, this film was bound for an epic fail or glory.

It seemed that ‘Gen X’ loomed big during this time. Fight Club, American Beauty, and The Matrix were companion releases, so there was a lot of ‘what am I doing with my life’?  ‘is there anymore than this’? sort of thing going on and Being John Malkovich fits in perfectly with this mindset.

Craig Schwartz (John Cusack) is an unemployed puppeteer married to pet-obsessed wife Lotte (Cameron Diaz). After a lot of persuading, he gets a job for as a file clerk for LesterCorp, in the strange Floor ​7 1⁄2 low-ceilinged offices of the Mertin-Flemmer Building in New York City.

Craig is a complete dick, and fancies new collegue Maxine Lund (Catherine Keener), who basically can’t stand him and takes the piss out of him. Craig then discovers and enters a small door hidden behind a filing cabinet in the office, crawls through and magically  finds himself in the mind of actor John Malkovich for 15 minutes. He tells Lotte, who has a go, then decides she’s a transsexual and wants to be ‘IN’ John all the time.

He reveals the portal to Maxine, and together they charge $200 a go to others who want to be john Malkovich. Lotte is also involved and also falls in lust with Maxine. Maxine then goes out to meet Malkovich, becomes his girlfriend but will only have sex with him when… Lotte is in him. Confused? Okay well I won’t carry on and tell you rest.

There’s no doubt this is one of those films that is so very different from the norm, that you remember it. However, I have to admit I wasn’t a fan. I wasn’t bored watching it and it did hold my attention, but it just didn’t resonate with me at all, and despite its ‘classic’ status I felt rather flat after watching it and really thought the end was lazy.

I used to live in Los Angeles and write about Rock bands. Now I live in wonderful Wales and write about films. I like video games (especially RDR2) and am also a painter...gratuitous plug: follow my art account on Instagram @artbytinar
Revival Black release new single No Secrets, No Lies ABC of gaming: July 2019