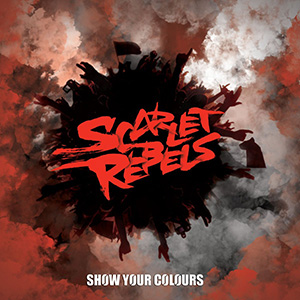 Welsh rock sensations Scarlet Rebels have come top of a 33,000 strong poll for Band Of The Year 2019.

The poll is carried out each year by the popular and respected, Great Music Stories which broadcasts a weekly rock radio show on Meridian FM and across the internet. Previous winners have included, The Quireboys, Massive Wagons & Those Damn Crows.

Not only did Scarlet Rebels win Band Of The Year but they were also finalists in the Album Of The Year (Show Your Colours) and Single Of The Year (Heal) categories.

Frontman, Wayne Doyle, said of the award, “We’ve listened to Guy’s (Guy Bellamy producer) show for years. I remember being sat listening to the count down in 2017 when Those Damn Crows won it. It was just as we had recruited Josh and Chris into the band and decided on a name change. I thought to myself, if we can be in the mix then we’re doing something right. I never ever thought we’d end up winning it.

“To follow in the steps of The Quireboys, Massive Wagons, Those Damn Crows and The VirginMarys is such an honour and quite daunting too. We are going to work even harder to make sure we live up to the title.

“From the bottom of our hearts, thank you to every single person who has voted and supported us this year. You’ve no idea what it means to us. We’ll see you on the road.”

Here’s what they are saying about Scarlet Rebels…

‘Show Your Colours’ is quite possibly the most impressive new rock album of 2019 – 5/5
Album of the month
Guy Bellamy, Great Music Stories

Scarlet Rebels manage that most seductive of combinations… hard-as-nails guitar chops and the kind of soaring, alt-infused choruses that instantly places them in a contemporary light.
Classic Rock Magazine

‘Show Your Colours’ is an album packed full of melodic, invigorating and emotive rock tunes that lift the senses, and illustrate the accomplished musicianship of the band. From the ballsy and political opener that punches you in the face, to the slowly building, powerful ‘Heal’, there is something for every rocker here. No wonder these guys are pulling crowds and building on their solid reputation as incredible songwriters and performers.
Down The Front

Scarcely giving the listener space to breathe, they fire off a series of frenzied riffs and pummelling choruses, giving them an anthemic harder edge while keeping a melodic handle on it. It’s a classic rock shakedown from the valleys.
Hugh Fielder, Classic Rock Magazine