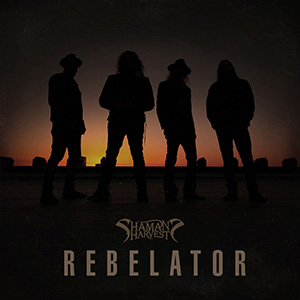 The Missouri rockers return with their first album in five years. The album will be released on 11th March and have previously revealled new songs “Under Your Skin”, “Bird Dog” and “Voices.” You can pre-order the album HERE Singer Nathan Hunt shares, “Clint and I have been threatening collaboration for a long time now. Shaman’s has been a fan of his work since the band’s inception, so you can imagine there being nerves going in, but it felt like writing with a band mate. We both belong to the same tribe of Lumbee that hail from Pembroke, a place where ya can’t throw a stone without hitting a Lowery or a Hunt, so we’d talk about family ties and occasionally lay down a part. He came in with a fantastic slinky riff and a theme I got behind immediately and we were off writing.  The melody feels carnal and gritty. It’s a Shaman’s Harvest tune with a twist. I’m stoked for the world to hear a rock song a couple of old Lumbee dudes wrote in an afternoon in St. Louis.”“This was the hardest record we’ve ever made, on every level,” says Nathan Hunt, referring to Shaman’s Harvest’s seventh LP.    Their last two albums were hits with a combined 190 million streams between them but after a couple gruelling years of touring behind their last album, 2017’s Red Hands Black Deeds, the band were creatively and personally drained. The quartet—vocalist Hunt, guitarists Josh Hamler and Derrick Shipp, drummer Adam Zemanek—hit the reset button hard, clearing out six months for demo construction at their Jefferson City rehearsal space.  “A tornado ripped through our town, 2 miles from our studio, leveling everything in its path” recalls guitarist Josh Hamler.  “Luckily, no one was killed”. “There was so much stop and go,” adds Hunt. “There was a flood. Then somebody would have to go home, or we’d have a fucking tornado.”“Or we’d run out of money,” Hamler adds with a laugh. “It was like Murphy’s law at one point—like, Jesus, what else is going to go wrong in the making of this record?”  The storyline seems obvious: The Missouri hard-rockers assembled this project during a global pandemic that debilitated the entire music industry. “Hard” has been universal lately, but the road to Rebelator was even rockier than the band expected. In March 2021, Hunt had to make a life-changing decision whether to amputate his leg or not. Whilst working in construction a decade ago, Hunt excavated an army base site when the edge gave way. He crashed 20ft to the bottom, crushing his ankle. Years of surgery followed, slowly, the leg below the knee was rebuilt. “I’d get healed up only to realise the problem was worse off,” he remembers. Eventually, a hospital bed was brought into his home, and he filled his days writing. As he began to walk again, he was diagnosed with throat cancer brought on by a rare autoimmune disease. “It didn’t take long to realise I would never again support the family with construction, so I just went headlong into making music,” he reflects. “Some dark stuff came from that period. I feel as a man you can’t really express that loneliness, so I’d put it in melody,” he says. This fed into 2014’s Smokin’ Hearts & Broken Guns. “It’s something I felt I could tap into for the writing of Rebelator.” He recovered from throat cancer, but the leg got worse. Prolific on the road, nightly, they prowled stages on their relentless touring; Nickelback, Cheap Trick, Seether, Black Stone Cherry and In This Moment. They shared the biggest stages with AC/DC, Alice In Chains, Killswitch Engage, Stone Sour, Godsmack, Shinedown, Rob Zombie, Ghost and more. They smashed through each set, and every night, Hunt pushed through the pain barrier. “The fellas in the band cover the stage movement, the jumping and all the high energy, while I’m able to really internalise and project from a place of emotion,” he explains.  Rebelator was finished, but Hunt’s pieced-together leg continued to deteriorate. He started the search for a doctor who would amputate so he at least would be able to walk with a prosthetic. “I wasn’t apprehensive about the decision or anything. I was hopeful. A world without the same pain all the time seemed unreal but possible,” he says. In May 2021, as they released their first new song in three years, “Bird Dog,” he found hope and a doctor who replaced the joint and rebuilt the Achilles. Today he says,” I’m still recovering and probably will over the next year or so, but I’m already better off than I was before the procedure. It’s giving me a newfound focus on the things that are important to me. Like slaying crowds, and being present and active for my new daughter. I feel like I’ve been given the tools to have a higher quality in life.” Shaman’s Harvest persevered through everything and wound up with their richest, most well-rounded album to date – to say it is a triumph, for the band, would be an understatement.