StagePlayer+ and a number of award-winning independent film producers
have collaborated to showcase an exciting array of short films with the
launch of StagePlayer+’s Hidden Gems Collection, highlighting up and
coming Directors and selected film festival content previously
unavailable to film & culture fans.
Distributing Arts content to over 90 million TV households worldwide,
StagePlayer+ offers flexibility and convenience. With no monthly
subscription, viewers only pay for the productions they want to watch,
helping theatres, production companies and film producers thrive in a
post-pandemic world.
The Hidden Gems film collection includes:
Edmund the Magnificent – Directed by Ven Ockrent & starring Mark Bonnar,
David Bradley, Rebecca Front & Ian McKellen
A once-legendary farmer invests his life savings in a thoroughbred
piglet to breed new life back into his now dilapidated farm. But when he
puts young Edmund out to breed, and the lad abstains, the farmer is
forced on a journey that will challenge everything he thought he knew
about pigs, love and the true value of life.
Earthrise (Tribeca)
Earthrise tells the story of the first image captured of the Earth from
space in 1968. Told solely by the Apollo 8 astronauts, the film recounts
their experiences and memories and explores the beauty, awe, and
grandeur of the Earth against the blackness of space.
Land’s End (BFI Flare, London LGBTQ+ Film Festival) – Directed by Ben
Strebel & starring: Akshay Kumar, Joseph Mawle, Hayley Carmichael, Lee
Byford
Land’s End follows the magnetic relationship between a naive young man
and a former convict as they take a road trip across the southeast
coast.
Cerberus – Directed by Remy Bazerque & starring James McGregor & Tom
Ripley
Two brothers torment each other in a scenario they can’t escape. A
modern take on mythological eternal punishments
Void & Method – Directed by Remy Bazerque & starring Zoe Telford &
Laurent Bateau
Features A dangerous love triangle between a psychotherapist and the
split personalities of his patient.
Remora – Directed by David Schofield & starring Josh Casswell, Matthew
Mellalieu & Luke McGibney
Behind the faded grandeur of a seaside resort, the vulnerable and poor
become prey for local predators.
The Shot – Directed by David Schofield & starring Nick Pearse & Mia
Vore.
Unlikely companions Graham & Chelsea walk into a bleak wilderness and
unearth each others dark side.
Crisps – starring  Jim Dethick, David Robinson, Clare Bright & Max Hall
In an uncannily nostalgic world, seemingly imagined by an unseen
eccentric narrator, Al Crisps finds his life takes a strange turn when
his usual routine is broken.
Peaceful Fields – starring David Robinson
Filmed in the Derbyshire hills over the course of a year, David Robinson
walks the fields he has always farmed. A poetic meditation on one man’s
heartfelt relationship with nature.
Candyfloss – Directed by Jed Hart & starring Dean Christie, Grace
Hogg-Robinson & Barry Keoghan
Jasmine, a young teenage girl on the run, is taken in by Shane, a
showman who works on a travelling fairground passing through town. As an
unorthodox bond between the pair builds, their combined quest to evade
the past pushes both characters closer together, and in turn, closer to
danger.
War Paint – Directed by: Nat Luurtsema & starring: Yasmin Akram, Gabby
Best & Mike Wozniak
An enigmatic narcissist befriends a despondent loner from Book Club and
drags her on a gruesome misadventure.
The Newt–Man of Memory Lane (Encounters Award Winner) – Directed by Jim
Dethick & starring David Robinson, Edda Hill, Lorraine Hill, Joseph
Dethick
A scheming old man has to face up to his dark and secretive past in
order to uncover the truth about a legendary and dangerous figure known
as the Newt-Man.
The Happy Warriors –
In a beautiful but dangerous landscape, the Cairngorm Mountain Rescue
Team strives to protect their volunteer ethos as well as those who come
to grief on the hills.
Three Women Wait for Death – Directed by: Isabelle Sieb & starring Nat
Luurtsema,
Lu Corfield, Phoebe Nicholls
Miranda and her daughters, Hester and Rose, are crammed in a rotting
little caravan to be near their Gramps in his final days. They love him,
but his care bills are mounting, and when they discover that he’s hidden
his savings.. they could bloody kill him.
Firecracker (BFI London Film Festival)- Directed by: Jonathan Harris &
starring: Alfie Stewart, Lu Corfield, Lara Peake, Anton Saunders
Champion stock car driver Charlie is a racer, not a wrecker. But would
he take a beating and risk it all for those he loves?
How to watch:
Via the StagePlayer+ app on Amazon Fire TV or via the browser at
www.stageplayerplus.com 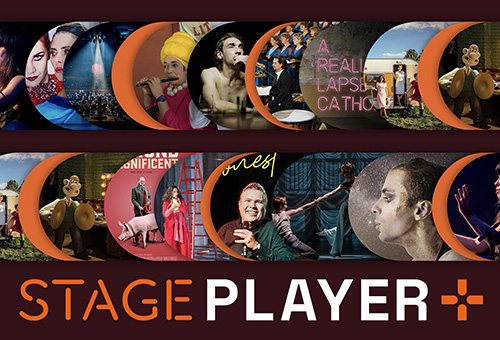