SHTEVIL ‘Thank You’ EP, out now 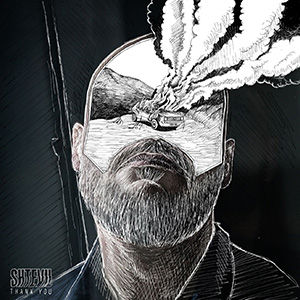 European modern rock project SHTEVIL has dropped an enticing new EP, Thank You, out now. SHTEVIL has also just revealed two engaging videos to coincide with the release: Who I Am & Drive It Like You Stole It (see below).

Coming at you from Gent, Belgium, SHTEVIL was formed in 2015 when Steven Vergauwen (aka SHTEVIL) set about to create a fresh project that was unique and exciting. Crafting music reminiscent of Led Zeppelin and Grand Funk Railroad, but also firmly lodged in the 21st century, SHTEVIL has been influenced by an array of musicians ranging from Prince, Thin Lizzy and Al Green to Kanye West. SHTEVIL, in his bold and out of the box approach, has quite certainly accomplished his goal to produce something both memorable and distinctive

Thus far, SHTEVIL has released a hatful of very well received singles. The track On Fire topped Virgin Radio (Italy) charts, and the song was also used by a slew of TV programs throughout mainland Europe. SHTEVIL’s debut album, STUNG, also picked up widespread praise across Europe, enabling SHTEVIL to tour across the mainland in support of the record.

SHTEVIL has now just delivered a blistering new EP, Thank You, which unleashes five killer cuts of contemporary Classic Rock laced with soul and armed with a modern-day delivery. SHTEVIL remarks about the journey in creating the EP: “A lot has happened since the first album. I quit my job, moved, got married, lost my mom & grandma. Enough stuff to make me think of where I am and where I came from as a person. I did most of this record on my own, from recording and mixing to even the artwork. This EP is mainly about overcoming the obstacles of the past few years and being especially grateful for all those experiences, good and bad, hence ‘Thank You’.”

Review: Coogan’s Bluff Twister release new single ‘Save Us Yourself’ on Oct 30