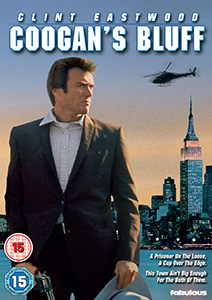 After carving a cinematic name for himself in the “Dollars Trilogy”, Clint Eastwood began to make waves in American cinema with Coogan’s Bluff, which paired him for the first time with director Don Siegel, a man who would become a key mentor for Eastwood as he progressed from being in front of the camera to behind it and ultimately becoming an Academy Award winning director.

Still attired in cowboy hat and boots, Coogan (constantly being mistaken as being from Texas in the movie) is a transition character for Eastwood that bridges his already established Western credentials and the hard nosed, play by his own rules characters that would form such a strong part of his oeuvre going forward, especially the character of Dirty Harry which Eastwood and Siegel would collaborate on just a few years later.

Littered with witty and memorable one-liners that would also be a staple part of Eastwood’s career, Coogan’s Bluff is light on action set pieces but never ceases to be anything but highly entertaining thanks to the screen presence of  Clint and the assured direction of Don Siegel.

Not one of the movies that instantly springs to mind when thinking about Clint Eastwood, but definitely one that shouldn’t be ignored.

Take a trip to NYC with Coogan, you won’t regret it.