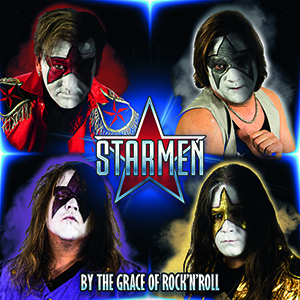 Swedish hardrock outfit Starmen, release their 2nd single and video ”Kisses of an Enemy” from the upcoming, third album “By the Grace of Rock‘n‘Roll”. This song presents the band‘s newest member, Jonatan Samuelsson (Narnia) as Starman Gold, and he also debuts as lead singer.

The third album by Starmen has already received great reviews from all over Europe and Japan, and the band certainly has showed that they are definitely here to stay. Second single and video from “Kisses of an Enemy” – a smash-hit that should appeal to avid fans as well as new listeners is released today, February 26th 2021, on all major digital platform, along with a music-video on YouTube (see below).

The song is written and sung by the new band member, bassist Jonatan Samuelsson (Narnia), as Starman Gold. This is the premiere for Jonatan as lead singer, but on the album all members participate as lead singers, something that was the goal for the band from the start: A band where all members are equal and where all can be creative and sing, like The Beatles or Kiss.

– I am very happy to be a part of this creative team, and to be honest a bit nervous to step up to the microphone for the first time in many years, says Jonatan, and continues:
– But I enjoyed it and hope that people will like it! We had a good time recording the song and the video, he concludes.

Full album will be released on CD and on all major digital platforms by Melodic Passion Records and distributed by Sound Pollution Distribution on March 12, 2021.

In Japan the album is released by Marquee Avalon today.

Make sure to listen to my interview show with Starmen vocalist/guitarist/songwriter Kristian Hermanson.