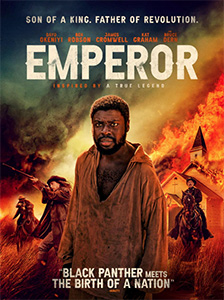 Inspired by the legend of 19th century freedom fighter Shields “Emperor” Greene (played in the movie by Dayo Okeniyi); a descendant of African Kings who turns into outlaw slave in the pre-Civil War American south, Emperor, while not historically accurate (how many movies are!?), is a fascinating and insightful look into one particular timeframe of Shields life.

Dayo Okeniyi gives a strong performance as Shields, eliciting empathy and heartache from the viewer during the horrific situations that he finds himself in. Events that are unfortunately all too common when depicting life from this era of American history and which still resonate today.

I’ve always enjoyed movies where a lone survivor must battle against the odds to try and survive, and these are always made better when based on true events. The story of Shields Greenes was not familiar to me before viewing, but, and as a testament to Emperor as a movie, after watching I went down an online rabbit hole reading more about him.

A couple of unconvincing CGI effects towards the end were a little jarring, but thankfully the rest of the narrative is taken with great performances by Dayo Okeniyi, James Cromwell, Bruce Dern, Harry Lennix and the rest of the cast as we watch Shields on the run, trying desperately to survive and give his Son the freedom that he has wanted for him since the day he was born.

Review by Dave from a streaming link kindly supplied by Kaleidoscope Entertainment via The Warrior Agency.