Celebrated Canadian rock and roll band The Damn Truth are pleased to announce they will be special guests on King King’s February 2022 UK Tour. Tickets are available from www.kingking.co.uk. The nine-date tour starts at York’s  Grand Opera House on February 10, 2022 and ends at London’s The Electric Ballroom on February 24, 2022. 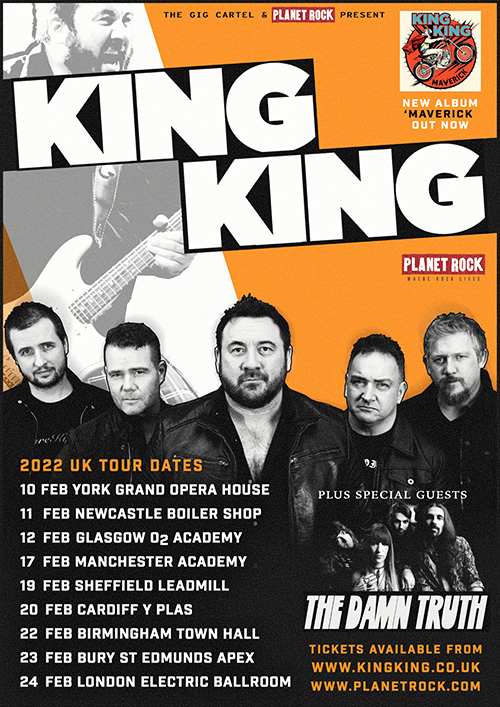 The news follows the news of The Damn Truth’s forthcoming album “Now or Nowhere”, released by Spectra Musique/Sony Music on Friday May 7th.

The Damn Truth’s latest single, “This Is Who We Are Now” has taken flight in the UK with six weeks of airplay on Planet Rock and a spot play on BBC Radio 2’s Rock Show with JohnnieWalker. The single also won Tracks of the Week on Classic Rock’s Louder Sound.

“Let the truth be told, Canadian rock band, The Damn Truth are a fresh revivalism of the psyche music scene from the mid 60’s,” says Jeff Laufer of Rock Bands of LA. “Critics and fans alike praise their regeneration of the hard rock sound and values.”
Continues Jeff – “Bob Rock found a spirit within the band that he hadn’t experienced for many years. He saw something special… an artist with burning talent that needed the right direction to break wide open…like lightning in a bottle.”

“The production by the legendary Bob Rock capturing the essence of what the band have without damaging the humanness at its core. The drums thunder, the bass throbs, the guitar alone could wreak havoc to the solar system and the vocals of Lee-La Baum control the storm, a commanding presence over the hurricane.” – Metal Planet Music

Six tracks on the new album “Now or Nowhere” were produced by legendary Grammy Award winning Bob Rock (Metallica, Aerosmith, Motley Crue, Bon Jovi, Bryan Adams, The Cult, The Offspring) at Bryan Adams’ recording studio “The Warehouse” in Vancouver.
“Now or Nowhere” chronicles the band as they navigate life, love, and everything else in a world gone seemingly upside down and sideways during the past year they were unable to finish the album with Bob because of COVID-19 restrictions, the band recorded the remaining three songs with help from Juno Award-winning producer Jean Massicotte (Patrick Watson, The Damn Truth) who mixed “Everything Fades”; and the rest of the mixing was done by Vance Powell (Jack White, Chris Stapleton), Nick DiDia (Bruce Springsteen, Rage Against The Machine), and Mike Plotnikoff (Van Halen, Cranberries, Three Days Grace).

It’s worth noting there are three Grammy Award winners on this album (Bob Rock, Vance Powell, and Nick DiDia).

The Damn Truth have extensively toured Europe and the USA, opened tours for Z.Z. Top (and partied with Billy Gibbons in his pyjamas), the Sheepdogs, Styx, and Rival Sons.

They sold out the legendary Whisky a Go-Go in Los Angeles, sold out the Corona Theatre in their hometown of Montreal, and even had one of their videos featured on the official Janis Joplin Facebook page. It’s a culmination of a lot of blood, sweat and tears that’s come fruition with “Now or Nowhere”.
“Now or Nowhere” is available to pre-order. The single, “This Is Who We Are Now”, is now streaming on YouTube and Spotify.
Make sure to listen to my interview show with King King’s Alan Nimmo.

Chivalry 2 will Double in Size for Free

The Doctors: Behind the Scenes Volume 1 & 2