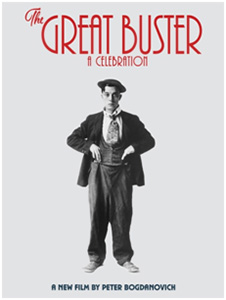 From Oscar nominated director Peter Bogdanovich comes documentary The Great Buster, a celebration of the life and career of one of America’s most influential and celebrated filmmakers and comedians, Buster Keaton, whose singular style and fertile output during the silent era created his legacy as a true cinematic visionary.

Journeying from his early beginnings on the vaudeville circuit alongside his family the documentary explores the development of his trademark physical comedy and deadpan expression leading to his career-high years in the 1920s where he wrote, directed, produced and starred in his own films including the remarkable The General (1926) and Steamboat Bill, Jr. (1928) that immortalised him as one of the greatest actor-filmmakers in the history of cinema.

Filled with stunningly restored archive Keaton films from the Cohen Film Classics library, the film is interspersed with an eclectic mix of interviewees from collaborators, filmmakers, performers and friends including Hollywood stalwarts Dick Van Dyke and Mel Brooks to Johnny Knoxville and Quentin Tarantino, fans and experts alike all influenced in their careers by the work of ‘The Great Stone Face’.

Director Peter Bogdanovich, a filmmaker and cinema historian whose landmark writings and films on such renowned directors as John Ford and Orson Welles have become the standard by which all other studies are measured, is delighted to inspire more people to seek out Buster’s work, remarking recently in The Guardian that ‘I tried to include members of the audience who didn’t know anything about him to begin with, and the people who have seen it tell me that it made them want to see more Keaton. Which was the intention!’ Having been just a young child when his father introduced him to Buster Keaton he ‘loved him right away…that was the start of the great affection I have for silent comedy’.

To celebrate the UK release of The Great Buster special Q&A preview screenings will be held at:

We’re delighted to welcome comedian and Buster Keaton aficionado Paul Merton to introduce a screening of the documentary, followed by a Q&A where he will be joined by David Macleod – Keaton historian, author of The Sound of Buster Keaton and co-founder of UK Buster Keaton Society The Blinking Buzzards – to discuss their passion for Buster and his influence on comedy and film. @CentralPictureH

David Macleod will again to be on hand alongside London film writer and programmer Phil Concannon to discuss The Great Stone Faces’ work at a screening at the DocHouse, the UK’s first documentary cinema. @BerthaDocHouse

More Q&As screenings to be announced…