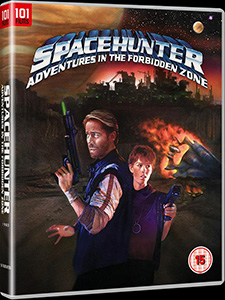 While idly cruising around in his bedraggled spaceship, bounty hunter Wolff (Peter Strauss) intercepts a message offering a large sum of money for the rescue of 3 women who narrowly escaped from an exploding starliner and have crash-landed on a barren planet.

Upon landing on the planet, Wolff reluctantly befriends Niki (Molly Ringwald): a tracker who promises to take him to where the women are. Unfortunately it won’t be as easy as Wolff first thought, as half human/half machine, and ALL completely bonkers lord of the underground “Overdog” (Michael Ironside) has captured them and wants to use them as a live sport for the cheering masses…think Takeshi’s Castle but with far more dangerous contraptions.

On top of all that, Wolff’s ex-friend and fellow bounty hunter Washington (Ernie Hudson) is also on the planet and old arguments rear up again as they face off against each other, before reluctantly agreeing to team-up against the psychotic Overdog and his gang of mutants.

Released on Blu-ray for the first time, Spacehunter: Adventures in the Forbidden Zone is a typical low budget 1980’s space adventure…low-fi effects and cheesy dialog…and all the better for it.

Peter Strauss plays it straight as the stoic hero Wolff, which is in direct contrast to Molly Ringwald, whose constant whining admittedly grates to begin with, but thankfully her character becomes more likeable as the narrative progresses.

Michael Ironside is almost unrecognisable under a huge amount of prosthetic makeup, and he chews up the scenery at every available opportunity. I would have welcomed another movie just about him and how he came to be like that.

Their adventures are never anything short of entertaining, and 5 minutes doesn’t go by without something weird and wonderful happening onscreen.

If you like your sci-fi cheap, cheerful, cheesy, and with its tongue firmly stuck in its cheek, then Spacehunter: Adventures in the Forbidden Zone is well worth taking a ride with.