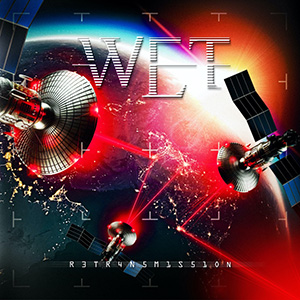 Much to the delight of fans all around the globe, melodic rock supergroup W.E.T. have announced the upcoming release of their fourth album, ‘Retransmission’, which will be released on 22nd January 2021 on CD, LP, limited edition colour vinyl and digital formats via Frontiers Music Srl.

Core members Jeff Scott Soto, Erik Mårtensson and Robert Säll (make sure to listen to my shows with Jeff and Erik…Dave) have delivered another astounding record that will surely be the first contender for Album of the Year in its genre, with their collaboration truly epitomizing what melodic rock is all about in the new decade. The key element at the foundation of W.E.T. has always been to create a modern melodic hard rock sound to drive the genre into the future, and, with the addition of powerhouse rhythms and a top notch production (courtesy of Mårtensson), their music is both classic and contemporary.

After their genre-defining 2009 self-titled debut, Robert Säll (the ‘W’ from Work of Art), Erik Mårtensson (the ‘E’ from Eclipse), and Jeff Scott Soto (the ’T’ from Talisman) faced the daunting task of following it up. However, ‘Rise Up’ (2013) priced to be a stellar release, while their third opus, 2018’s ‘Earthrage’, further cemented their legacy. With these three exceptional records already under their belts, ‘Retransmission’ tops them all and is a milestone release.