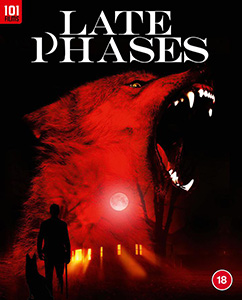 Ambrose McKinley (Nick Damici) is a cantankerous blind military veteran who, after the death of his wife, reluctantly moves into a retirement community at the insistence of his son.

All is not peaceful though in this community, as people go missing at a far too regular occurrence, and so, after a shocking incident involving his trusty dog, Ambrose begins to investigate what is actually happening.

What he finds, and the way that he decides to deal with it, kept me very much entertained throughout its entire 95 minute running time.

Ambrose is the centre of virtually every scene, and Damici’s performance as the grumpy yet focused military vet had me rooting for him, despite him not quite treating everyone with a warm smile whenever he met them.

Damici’s screen presence (and also the fact that he’s not a “tween” lead as so ofter found in these types of movies) is the core of why I enjoyed Late Phases. More older leads please!

Kudos to the filmmakers for the practical effects too, especially for the main antagonists, who had me conflicted between thinking “aww, they’re cute” while at the same time “I wouldn’t want to meet them on a moonlit night“…they could have been the descendants from Karen White in The Howling!

More of a character driven piece than an out and out horror movie, Late Phases fortunately has the actors and narrative to carry it along without becoming boring. There are no big surprises as to what unfolds, but it kept me wrapped up in it all and cheering for Ambrose as he steadfastly refused to succumb to old age, his blindness, or those big furry badasses that kept taking a bite out of everyone.