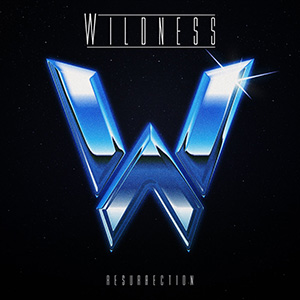 Frontiers Music Srl is pleased to announce the upcoming release of ‘Resurrection’, the new album by Swedish melodic rockers Wildness. Consisting of eleven mini masterpieces with one foot in the ’80s and the other in the here and now, it has been produced, mixed and mastered by band founder, main songwriter and drummer Erik Modin. A first single from the album entitled ‘Tragedy’ is available now, with the album to follow on 14th October.

Wildness will be including songs from ‘Resurrection’ as part of their set at the Frontiers Rock Sweden event on 8th October at Slaktkyrkan in Stockholm, where they will be appearing alongside labelmates Treat, Art Nation, Perfect Plan, Seventh Crystal and Fans Of The Dark. Tickets can be purchased HERE

Having signed to Frontiers following the release of their second album, ‘Ultimate Demise’ (2020), the recording of ‘Resurrection’ followed a period of fine-tuning its contents and then nailing them down in the studio. The finished record also sees guest appearances from vocalists Danny Rexon (Crazy Lixx), Hank Erix (Houston), Ludvig Turner (Reach) and Dani Hart as backing singers.

Wildness was formed in 2014 by Modin, guitarists Adam Holmström and Pontus Sköld, plus singer Gabriel Lindmark, with bassist Marcus Sjösund added during the recording of their self-titled 2017 debut album on AOR Heaven. That record had immediately become a favourite among fans of the melodic hard rock genre.

The following year saw the group perform at several international festivals, where they shared stages with Dokken, H.E.A.T, Dee Snider, Crashdïet, Dragonforce, Arch Enemy, Warrant, Vixen and Pretty Maids. 2019 saw Lindmark leave the band, to be replaced by Erik Forsberg (ex-Blazon Stone) for the recording of ‘Ultimate Demise’, which included the fan favourite ‘Cold Words’. ‘Resurrection’ sees Wildness armed with the material that will surely take them to the next level.