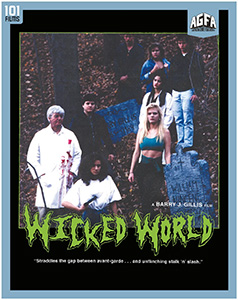 As I sit here I’m still not really sure what I think of Wicked World after it assaulted my senses for 103 minutes and left me feeling somewhat bemused as the end credits rolled.

Much like the previous AGFA releases from 101 Films, this is a low (zero!) budget indie movie where virtually anything can happen. However, I never really tuned into Wicked World in a way that I’ve done while watching previous AGFA titles.

The weird soundtrack, disjointed editing, bizarre narrative and experimental camera techniques just left me nonplussed, despite some metal music and lo-fi gore effects doing their best to draw me in.

The spine of the movie focuses on a cop called Grant (writer and director Barry J. Gillis) whose girlfriend is killed by a psychotic killer named Harold, who on release from the asylum becomes the target of revenge for Grant. Mixed up with all of that is a lot of, well…weird shit.

This is one that’ll I’ll have to revisit to try and find out what I really think of it, so if you want something a little more on the weird side, then give this a go…then let me know what you think.

NOTICE! This movie was shot on 16mm film and edited on tape. The transfer is taken from the original 3/4″ master tapes.