With Christmas and the New Year festivities over, it is time for movie fans to look back over twelve months of highs and lows, blockbusters and flops, high profile disappointments and left-field surprises and compile their own – highly subjective – top ten lists. Please bear in mind that while this is my personal ranking, chances are it won’t be yours. But disagreement and debate is healthy. It’s also true that it’s impossible for any one person to consume EVERY new release, so my list is far from definitive, having missed out on the opportunity to catch critical darlings such as A Ghost Story, Wind River, Detroit, Personal Shopper, The Florida Project, Ingrid Goes West, The Killing of a Sacred Deer and Call Me By Your Name. Heck, they almost make a Top 10 all their own!

Nevertheless, below are my placements of my favourite films I did get to see on the big screen in 2017. 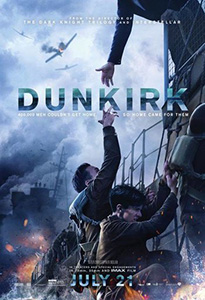 I’ve never been a huge fan of war films, which is the sole reason why Dunkirk doesn’t feature nearer the higher echelons of my list. But it is hard not to admire the craft behind Christopher Nolan’s three-pronged, unchronological WWI epic – even Harry Styles did not distract or disappoint in his acting debut. However, I do wonder if the stirring and evocative impact this grandiose film had on the big screen will be lost now it is available on DVD and Blu-ray. 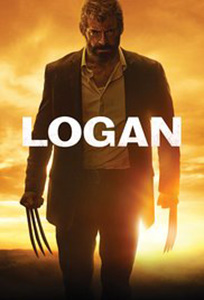 Hugh Jackman’s last stand as the adamantium-clawed superhero was a real change of tone – for the better. Thankfully the inclusion of some vicious fighting, gory injury detail and a surplus of swears aided the intensity rather than distracting from the core relationship between the three key players, which successfully touched on the legitimately emotional. 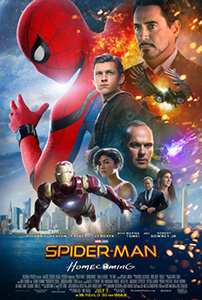 Another superhero film in a year overcrowded with them, and one which could be considered more typical of the popular comic book sub-genre than Logan, but one done right (which is seemingly more difficult than Marvel often make it look). Funny, thrilling, amiable and accessible, Homecoming got the balance right where Thor: Ragnarok did not. Plus, Tom Holland was the perfect balance of plucky, grounded and heroic as the third actor to don the Spidey suit in the last 15 years. 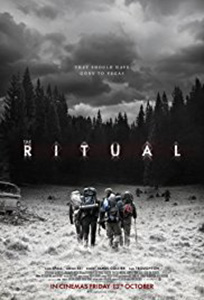 A small British horror adapted from a novel by Adam Nevill, this was a real pleasant surprise and one I sadly fear passed most people by. Rafe Spall heads a cast of old uni mates who reunite to honour the memory of their murdered friend with a trek in the Scandinavian woods. But it isn’t only their guilt and grief which haunts them… The Ritual was an expert psychological chiller which really attuned with me (probably because I am also an alum in his 30s who fears growing old). 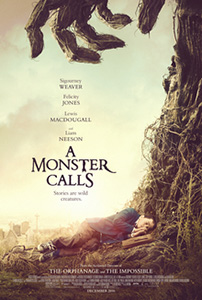 Based on a Young Adult novel by Patrick Ness, an imaginative young boy plagued with problems at home and at school is visited by a tree monster (voiced by Liam Neeson) who tells him three allegorical tales over three nights; tales designed to heal his broken heart. Helmed by Spanish director J.A, Bayona, A Monster Calls is a most sublime and multidimensional creature; dark yet delicious, tragic yet heartwarming, fantastical yet profoundly genuine. I laughed, cried and beamed throughout this cinema trip, and cannot wait to see what Bayona brings to the Jurassic World sequel next year. 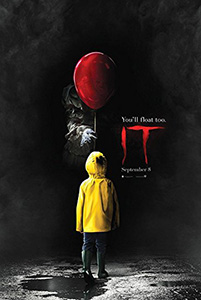 Remakes and reboots are far too common in Hollywood these days, especially considering most are reviled by the core fanbase, pale in comparison to the original and are solely motivated by the need to make money. Therefore, it was refreshing to see a 21st century interpretation of Stephen King’s 80s-penned, 90s-filmed horror tome not only receive a lot of love, but also break box office records. Part coming-of-age drama, part creepshow for clown-phobics, Pennywise the Dancing Clown was a force to be reckoned with in 2017 and deserved all the plaudits he received – bring on “Chapter 2” in 2019! 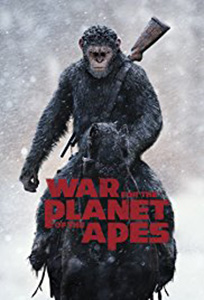 4: WAR FOR THE PLANET OF THE APES

Speaking of reboots, here is another which has well and truly bucked the trend and proved you can’t keep a good ape down! Bringing emotion to – and conjuring compassion for – his motion-captured animalistic avatar, Andy Serkis’ simian leader Caesar has revitalised the long-dormant Planet of the Apes franchise and Matt Reeves has rounded out this new trilogy in blinding fashion as the intelligent apes are forced into a battle they don’t want with the savage human survivors. War was exemplary and powerful moviemaking which only disappointed by so conclusively closing off the possibility of future sequels. Harrumph. 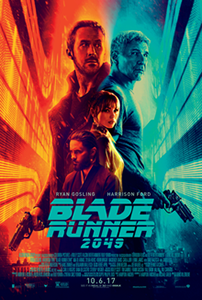 As much as I know this will offend Tina, I’m afraid I have always struggled to enjoy Ridley Scott’s original 1982 neo-noir classic; I find its aesthetic turgid and its slow-burn narrative dreary. So imagine my surprise that I was absolutely enchanted by Dennis Villeneuve’s belated sequel – even if it does clock in at a bum-numbing 163mins! It’s by no means a spritely beast, but 2049 is fascinating, philosophically deep and with stunning cinematography to lose yourself in – so much so that I found my admiration for it rising the more I thought about it in the hours after leaving the cinema. It’s not often that a sequel outshines the original, but here is a rare specimen. 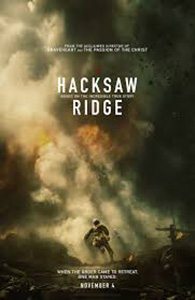 Earlier I justified putting Dunkirk at #10 by clarifying that I’m not a fan of war films. You might then wonder why I have put Mel Gibson’s elongated WWII epic at the lofty runner-up spot in my favourite films of last year? It’s not because I have suddenly shifted sensibilities, but Hacksaw Ridge earns its place by having such an almighty impact upon me. Half biographical melodrama, half visceral battle movie, this miraculous true story about a conscientious objector who became a war hero is as touching as it is explicit. Gibson pulled no punches and his first directing gig in over a decade is all the more exceptional for it. 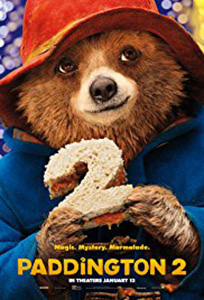 No, your eyes are not deceiving you. Paddington 2 legitimately is my film of the year. Where La La Land disappointed me to the extreme that I left the cinema angry and The Last Jedi frustrated me so that even four (admittedly improved) viewings later I still can’t quite shake my initial disassociation, Paddington 2 had my smile beaming and my heart signing for days after I saw it on the big screen. I enjoyed 2014’s first instalment well enough, but this second serving of the polite, duffel-coated delight BETTERS its predecessor to bring us a hilarious, heart-warming, clever and emotionally poignant slice of demographic-spanning family entertainment. While it may not deliver the intense wallop of some of the other films on my list, Paddington 2 is so exceptionally funny, joyous and charming that in terms of entertainment it was miles ahead of the pack. Now I’m off for some marmalade sandwiches…

Julia Ducournau’s Raw certainly succeeded in making me wince and cringe in an abundance of scenes as virginal veggie and first year veterinary student Garance Marillier develops a stomach-churning craving for meat… of all varieties. I was impressed by the metaphorical use of cannibalism to convey a coming of age tale of sexual awakening, although the putrid violence all too often overpowered the symbolism, while the protagonist’s transformation didn’t so much develop troublingly over time as awaken early and require hiding for the duration.

M. Night Shyamalan’s Split received rave reviews as a real “return to form” for the twist-loving auteur, however I was already won-over anew following 2014’s spiky horror-comedy The Visit. Split is a tour-de-force for star James McAvoy, taking on numerous personalities within the same body, however the climax didn’t quite tie things together satisfyingly enough for me to grant it a place in my top ten.

My childhood obsession with Saban’s Mighty Morphin Power Rangers meant that I was majorly intrigued by 2017’s big screen reinvention, courtesy of director Dean Israelite. Sadly, it seems that the less cheesy, CG-enhanced Power Rangers didn’t make enough mullah to ignite a new cinematic franchise (although it is still going strong on the small screen), but I still had a hoot watching the five teenagers with attitude get a “gritty” makeover – even if the out-of-suit drama took precedence over the superhero/giant robot battle antics.

Ridley Scott’s attempts to right the perceived ‘missteps’ in 2012 Alien prequel Prometheus (which I loved) lead to an even more divisive sequel in Alien: Covenant, which married god-like philosophising with chest-bursting, creature feature action sequences. I thought it was an absolute blast, sadly very few other people did, and it looks like Covenant marks the end of the road for Scott’s expansion of the xenomorph’s mythology.

Warm-hearted, funny and real, Emily V. Gordon and Kumail Nanjiani’s fictionalising of their actual bumpy road to romance was a real gem, surprising audiences and going on to become the highest grossing independent release of the year. With Nanjiani playing himself and Zoe Kazan stepping into Gordon’s shoes, it was easy to sympathise with this sweet yet un-sugarcoated couple who must contend with cultural differences and one of them being comatose! Despite the obvious title, I had NO IDEA what to expect from The Big Sick, and I loved it, even if producer Judd Apatow’s chronic perchance for overlong comedies means it is a little lengthier than need be.

Feature by Chris Howard. For more of his movie musings, please bookmark his website.