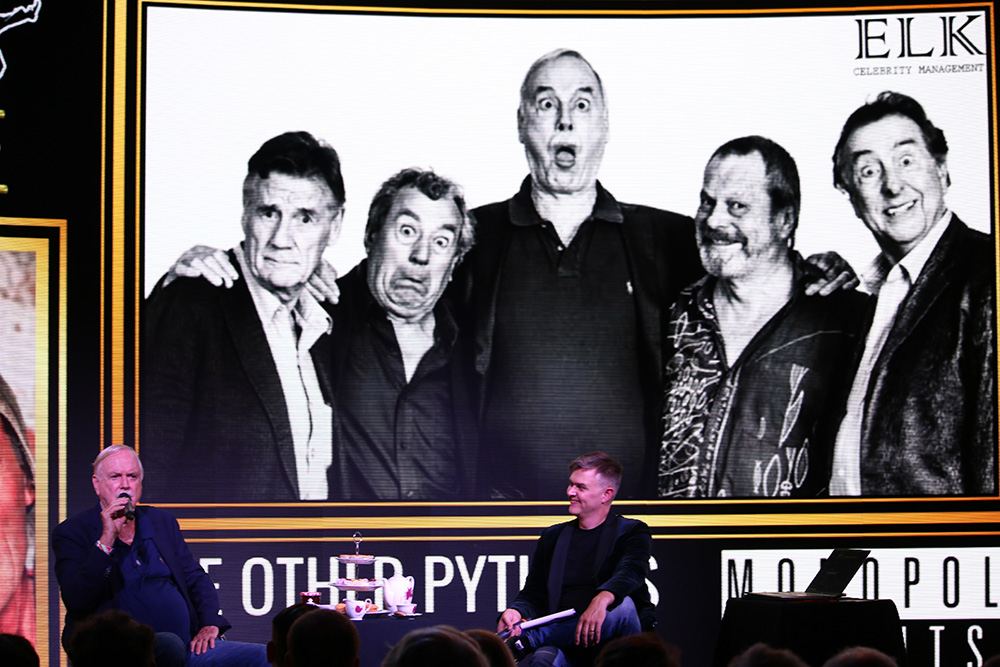 What’s this? A live event review going on our website!?

Needless to say, after an 18 month period where everyones lives changed immeasurably, it was an absolute pleasure to be out and about covering another fantastic event by the good people at Monopoly Events.

I can’t think of a more perfect way to kickstart live event coverage than by sitting in the company of comedy genius, actor, writer, producer, and raconteur John Cleese.

Having been introduced to Monty Python at a young age by my dad, John Cleese has been a fixture in my life for a very long time now, so it was with much excitement that I set out on the drive from North Wales to Manchester.

Having previously seen John back in 2011 on his “Alimony Tour”, I was looking forward to seeing him in a more intimate atmosphere and hearing some more of his wonderfully amusing anecdotes.

Monopoly Events had crafted a great stage, complete with a huge backdrop screen which alternated its images behind John to compliment what he was chatting about.

His 90 minutes on stage flew by, complete with stories from his time in University with Graham Chapman, working on TV shows in the 1960’s, Monty Python, Fawlty Towers, A Fish Called Wanda, and much more.

“Wokeism” and political incorrectness in todays society was given the full Cleese treatment, and when it came time for a 20 minute section to take questions from the audience, he thoroughly encouraged any questions not to be expressions of love for him, but to be as rude as possible.

His love for his fellow Pythons, both alive and no longer with us, was expressed across many stories…most of them as he took the piss out of his good friend Michael Palin and his travel programmes. Or as John kept referring to them “his boring travel programmes”…always preceded by a prolonged yawn and roll of the eyes.

Sage advice was also given, an example being “You care about too many things when you’re young. The good thing about being old is you just don’t give a fuck anymore”.

At the age of 81 John has certainly earned the right to not give a fuck anymore, and when thanked by a member of the audience for taking the time to come to Manchester, his reply was “It’s okay, I’m being paid”.

Teasing everyone with current plans for a Life of Brian stage play (complete with Terry Gilliam’s help on set design), A Fish Called Wanda musical, and an idea for a comedy programme about cannibals called “Yummy”, the good news is that there are still a hell of a lot more laughs incoming from him.

Monopoly Events are thankfully back doing what they do so well; putting on great live events for us all to enjoy, and as well as the return of more “For The Love of Horror”, “For The Love of Sci-Fi”, “Comic Con Liverpool”, “Comic Con Manchester”, and all the other live events that bring special guests and members of the public together in a celebration of our shared interests, I also hope that more “An Evening With” events such as this are on the horizon too.

And to end this review, let me put this very fitting little ear worm into your head.

Some things in life are bad
They can really make you mad
Other things just make you swear and curse
When you’re chewing on life’s gristle
Don’t grumble, give a whistle
And this’ll help things turn out for the best
And
Always look on the bright side of life
Always look on the light side of life…
Make sure to bookmark the Monopoly Events website and follow them on Facebook, Twitter, Instagram and YouTube.
Review by Dave from press access kindly supplied by Monopoly Events.