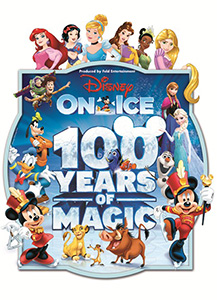 I’m going to try and avoid using the word spectacular too often in this review but, it’s going to be difficult as Disney on Ice: 100 Years of Magic was truly spectacular!

My family and I have been to the Disney on Ice shows for the past couple of years and have enjoyed them immensely. There is always the concern that they may just rehash the same material and capitalise on the popularity of Disney, however, any fears we had considering this was our third year running, were quickly dispelled with what was probably our favourite event to date.

Accompanied by our own little Belle (my daughter would dress as a Disney Princess everyday given half the chance!) who had the Disney magic sparkle in her eyes, could hardly contain her excitement. The show started with Mickey and Minnie Mouse (along with a group of skaters not in costume) getting the crowd moving along to the mouse bounce dance routine.

Shortly after, Goofy and Donald joined Mickey and Minnie as they explained the theme of the show was about them wanting to make a movie but, not knowing what it was going to be about. What followed was some incredible performances of Disney classics, old and new.

The thing that impressed me most about Disney on Ice: 100 Years of Magic was how seamless and quickly everything moved along. There was no downtime and it went from one performance to the next, just about giving you time to catch your breath.

We started with a brief showcase from Pinocchio which then went straight into Finding Nemo. We were especially impressed with Crush, the giant turtle from the movie which was the centre piece of a superb performance. This was followed up with a whole host of Disney Princes and Princesses from classics like Beauty and the Beast and The Princess and the Frog. I could tell from my daughters squeals of delight that this was one of her favourite moments. Next up was an extended story from Frozen, which again my daughter enjoyed immensely and had us all clapping and singing along.

There was a short intermission and just when you thought the show couldn’t get any better we were treated to a spectacular routine from Aladdin of the song Friend Like Me. The moment when 20 other Genies joined Aladdin, dancing in time with complicated choreography was absolutely fantastic!

This was followed up by an exciting routine from Toy Story which had the toy soldiers marching in time before Woody, Buzz Lightyear and Jessie took centre stage. Mulan followed and the highlight was a huge Chinese dragon and quick costumes changes where we almost didn’t realise what was happening in front of our eyes.

As we were nearing the end of the show we were treated to Timon & Pumbaa from the Lion King singing Hakuna Matata before being joined by Simba and Nala. It really was breathless stuff! The finale was all the performers on the ice together highlighting their immense talent. I can honestly say that they brought the house down in spectacular fashion.

Not wanting to finish this review on a low point but, my only real gripes were the prices of food and merchandise. I know it is to be expected but £8 for popcorn and £10 for parking is a bit ridiculous. Leaving the Genting Arena car park is also a bit of a free for all however, there were regular free buses to and from the car parks. On the plus side there were plenty of helpful staff to help you find your way around and get to your seat and everything ran like clockwork.

Disney on Ice: 100 Years of Magic was absolutely fantastic entertainment for all the family. The quality of the costumes, incredible talent, amazing choreography and skill shown by the skaters was a real sight to behold. My wife and I, but most importantly our daughter, all thought it was wonderful and I would urge you to see for yourself if you get the opportunity.

I love video games and movies as much as I love my children. However, I'd rather face off against the worst end of level boss, and watch the scariest horror movie than visit another soft play! Thanks for taking the time to visit the website and read this review. Please send any complaints to Dave and any money to me!
March 2017 Entertainment Show S.O.S – Tammy and the T-Rex