“You wanted the best, you got the best. The hottest band in the world…KISS”

I’ve heard the above introduction 31 times at KISS concerts across the UK since becoming a fan (some may say “obsessed with”) back in 1979.

I’ve also had the pleasure of hearing that introduction MANY times over the years at Dressed To Kill gigs, since myself and Ike (my friend since we were 11 years old and both of us huge KISS fans) 1stwatched DTK in May 1992 at the UK KISS Expo at the London Astoria.

So it was an absolute pleasure to go to my favourite live music venue, with my oldest friend, to see our most watched tribute band to the group who has truly been ‘the soundtrack’ to both of our lives.

A hot August Bank Holiday Sunday evening, where the weekend has been filled with a multitude of exciting sporting events and people drinking beers in their gardens while having a BBQ, is unfortunately not conducive to a high attendance at an indoor rock gig.

However, those who made the effort were more than ready to ‘Rock and Roll All Nite”.

With people wanting to make the most of every minute in the sun before DTK hit the stage, it was a sparse view that hit support band Penny Exchange when they stepped onto the stage.

It didn’t deter Gemma (vocalist) though and she quickly made light of the fact that it wasn’t exactly ‘standing room only’ while they did their set.

Starting with the T-Rex classic ‘20thCentury Boy’, the band blasted through a series of great rock cover songs, which even got the people outside sunning themselves coming inside towards the end of the set and joining in with the songs.

Myself and Ike commented on how we both thought Gemma had a great voice, and also on the musicianship of the band too. We would love to hear some original songs by them in the future.

It was then time to see DTK upstairs before they hit the stage and get some photos with them. 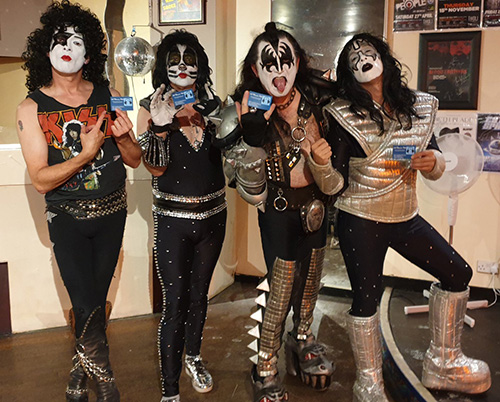 Like KISS (and most other bands that have been around for a significant amount of time) DTK have undergone quite a few band member changes over the years since they were formed in December 1990, leaving Ashley Brookes (Paul Stanley) as the only original member left.

Mirroring KISS, DTK also has ‘Paul’ as the heart and soul of the band. After almost 30 years of donning the makeup and high heels, Ash still absolutely kills it onstage, with the mannerisms, movements, patter and voice all coming together in a way that takes you back to every KISS gig you’ve ever attended.

Kicking off with Detroit Rock City, it was the start of a 20 song set that had all attending singing along and screaming for more.

Old school classics Deuce, Strutter and Cold Gin, were accompanied by Heaven’s on Fire, Creatures of the Night and (HALLELUJAH!) Tears are Falling…LOVE that song.

All the KISS concert mainstays were present and correct, including fire breathing, blood spitting and smoking guitar. But the theatricals definitely were overshadowed by great songs played by great musicians who obviously have a love of the band as much as those in attendance had.

UK setlist stalwart Crazy Crazy Nights got the loudest reception of the evening, but people were constantly singing along to all the other songs too.

KISS may well be on their ‘End of the Road’ tour, but hopefully DTK still have a lot of mileage in them yet before I have to say a final farewell to them too.

The night was summed up perfectly at the end of the evening when a group of people passed us by at the bar, with one of them declaring in a loud and clear voice, “that was fucking amazing”.

Review by Dave with thanks as always to Roki and Kirsty.

Very pleased to announce that @thebarksideshop is the official sponsor of #podcast mascot Bodhi: 60minuteswith.co.uk/news/podc… Take a few minutes to read the announcement on our website & make sure to let all your doggy loving friends know about them too. All RTs much appreciated. pic.twitter.com/IAKN6OGO3k

Congratulations @HelenHoraceW1 you've won the Northern Exposure boxset courtesy of @FabulousFilmsTV Please send us your details via the contact section on our website. #winner *** ANOTHER big DVD boxset #giveaway next week *** pic.twitter.com/QZn6Xhkdk7

Congratulations @roden_jannette you've won Think Like a Dog courtesy of @LionsgateUK @WitchfinderPR Please send us your details via the contact section on our website. #winner pic.twitter.com/wGtUBRwKYA