It’s hard to believe that it is now coming up to 1 year since I first attended an event run by Monopoly Events, which was their ‘For The Love Of Sci-Fi‘ in November 2018.

Since then it has been my pleasure to cover their Liverpool Comic Con, and Comic Con Manchester.

This however was my first experience of visiting a ‘For The Love Of Horror’, and joining me was my ‘Decade of Decadence‘ co-host Thom, who has heard me wax lyrical about Monopoly Events many times on our shows, and was looking forward to experiencing one himself.

First port of call is always the traders hall, and once again an eclectic selection of horror themed goodies was laid out across a multitude of stalls. Everything from commercially made figurines, to hand crafted sculptures, badges and t-shirts, movies and posters, scary bears, Transylvanian booze and hot horror movie themed sauces.

Both myself and Thom bought sauces from Dean of the Dead, and I can thoroughly recommend them all, especially ‘The Exsaucist’, which I am now putting onto virtually everything I eat…wouldn’t surprise me if I start putting it onto my morning cereal. 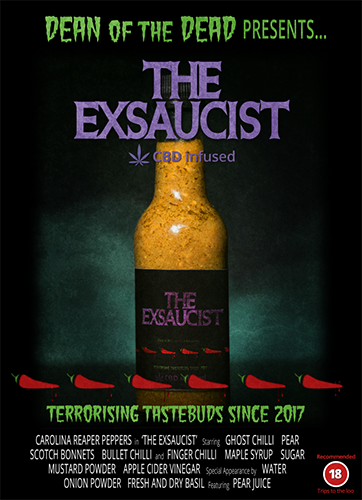 It was also great to see Horrify Me there ‘in the flesh’. I’ve been extolling the virtues of their incredible photography for quite a while now and it is something that both myself and Tina have on our wishlist of things to do. Make sure to bookmark their website and follow on social media for an inside look at what you can have done. 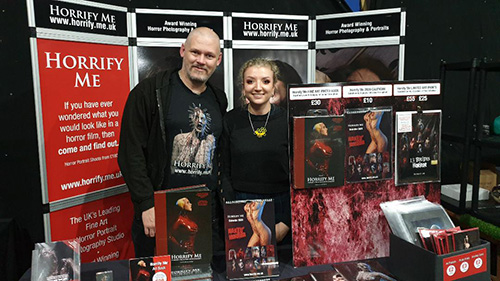 There was of course the usual array of set-builds which mirrored the locations of the movies that the visiting guests were from. These are always superb and add an extra layer of authenticity to any photographs that you wish to have taken.

As we walked around it was hilarious (yet slightly chilling) to hear screams emanating from the ‘scare maze’. Unfortunately we didn’t manage to see what was inside (not that we were too scared of course!), but from the look of panic on peoples faces coming out of there, it certainly lived up to its name.

A huge part of these conventions is of course the guests, and as both myself and Thom have chatted about at length on our Decade of Decadence show, Monopoly Events are doing an absolutely superb job of getting the right balance of celebrity guests across various genres.

It’s always nice to see ‘triple A’ guess at these events, but it is also a treat to meet with actors/directors/stuntmen etc that mean just as much to you for their part in your cinematic viewing history, yet are not as ‘high profile’ as the faces which are put onto the covers of movie magazines.

The guest list for this years For The Love Of Horror was once again superb, and you only have to look here to see that you could spend an entire day just going around all of the guests.

As mentioned earlier though, it was The Lost Boys reunion which drew a huge portion of the attendees…and what an amazing turnout it was! People were rightly excited to see so many of the cast reunited, and this played out into a lot of the costumes worn by people too.

Vampire David walked past me, quickly followed by a woman dressed as ‘Star’, then 2 little kids dressed as Chucky from Child’s Play wandered past, before I bumped into Pennywise from IT. Wherever you turned there were people dressed up, and more importantly…people having a great time, with faces beaming at everything going on around them.

Myself and Thom had a photo holding Chucky, while a bigger Chucky attacked us with a knife. Then we were both trapped in a torture contraption from Saw, before I had a photo with some demon nurses from Silent Hill (and if you look closely there’s both the bride of Frankenstein AND Jason Vorhees in the background too). 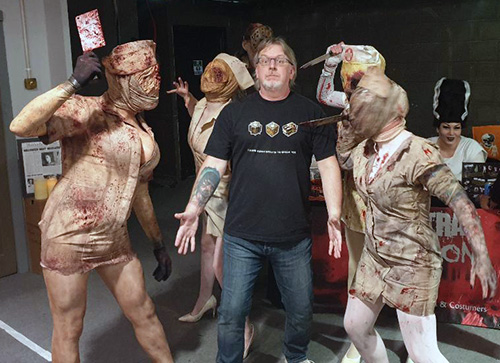 These are definitely not events where you can ever get bored!

Q&A sessions were spread across both days, but unfortunately we could only attend on the Saturday and had to miss Kiefer Sutherland’s appearance on the Sunday.

However, the main draw for both myself and Thom was Tim Capello…the oiled up saxophone player from The Lost Boys who steals the entire movie with his 12 seconds of onscreen time.

Not only could you have photos with him and get his autograph (as you can with all the guests), but he was also playing ‘I Still Believe’ live onstage (see video below), and when that magic moment happened, the entire convention centre came to a standstill and were glued to his performance.

A week later we are both still saying to our selves “did we really see that?” And thanks to Monopoly Events, yes we did!

I also have to mention what a genuinely lovely man Tim Capello is too. He took all the time in the world to speak to everyone that wanted to meet him, and while signing a photo for me (which I asked to be signed to me and Tina) he asked who Tina was. When I told him who she was and that she was due to come with us but sadly had to miss out because she was too ill, and that she was absolutely gutted about that because she had been looking forward to meeting him for so long, he immediately said to get my phone out and put it onto video mode. He then proceeded to make a lovely video message for Tina, which absolutely made her day…and mine too.

Living in the South of England, Thom has attended more comic con events based in and around London than I have, so it was great to hear when he commented on how well organised this was compared to some of the ‘bigger’ events in London that he’s been to.

Photo opportunities all seemed to run on time, and your photograph was printed and ready with hardly any wait. The quality of the photographs were excellent, made even better too if you took advantage of the set-builds.

This is now the 4th Monopoly Events run comic con that I have attended, and each one keeps getting successively better. With this years For The Love Of Sc-Fi just a few weeks away, my excitement levels are exceedingly high.

Keep a close eye on ALL of the Monopoly Events comic cons that they run throughout the UK, as I guarantee that you will have a fantastic time at any of them that you attend…and if you don’t believe me, then just look at the photo below. Thom finally meets Tim Capello, and it doesn’t get much better than that. 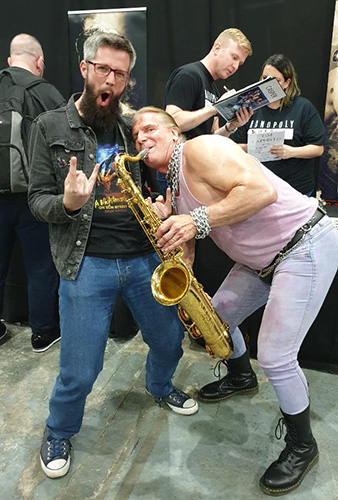 Review by Dave, with thanks to Monopoly Events for the press access.