Iconic film scores (not including musicals). There are so many.

The Godfather (Nino Rota), the ‘Dollars triliogy‘ (Ennio Morricone), Star Wars (John Williams). My own favourites; Blade Runner (Vangelis) and Paris, Texas (Ry Cooder), they are the soul of the film, indelible anthems that must have a perfect fit to the narrative. They swoop, soar and make you punch the air in delight. We hum them, we sing along, they are a real part of the movie experience.

If you were to ask any film lover, or even a non-film lover, if they could hum any music to one film, I guarantee they would have two choices: Bernard Herrmann’s Psycho shower scene, or John Williams Jaws motif; “duun-dun, dun-dun, duun-duun, …“. Both instantly recognisible whether or not you’ve seen the film it accompanies. Now imagine watching that film, and having a real life orchestra playing the score. A bit mind boggling really.

Mr 60MW (Dave to you) and I are big Jaws fans, both of us having been taken to the cinema by our dad’s in 1975 to see it. The Hippodrome, Wrexham for me:

I must admit I had mixed feelings about seeing Jaws on the big screen at Liverpool Philharmonic. How would it work? Would you actually be able to hear the dialogue? Would it stop so the band could play? I couldn’t get my head around it. But it’s easy: the film plays (and yes you can hear all the dialogue) and instead of the music being part of the film, on that films soundtrack, a full orchestra plays. In this case it was the wonderful Czech National Symphony Orchestra, with conductor Ben Palmer.

I spent the whole of the film not knowing whether to look at the screen or the harp player, it was perfect. I have never felt such tingles and as far as great cinema experiences go, this is pretty amazing. The sound fills you up like a ‘normal’soundtrack can’t (even with the best surround sound system in the world) and the fact that it’s live gives it a real vibrancy and urgency you don’t normally feel. It literally is waves of sound and waves of visual images (this is Jaws remember) almost assaulting your senses. I was shocked at how much it added to the whole experience.

I had a very delicate, elderly, and rather posh old lady sitting next to me, who was obviously a regular at the Philharmonic and who kept asking me who the conductor was. I don’t think she was expecting to see a film, and seeing her shoot 3 feet out of her seat at the crescendo when the head pops out of the boat, made ME jump as well! She sat agog throughout the whole film, as did I.

What a great night out, seeing a fantastic film and hearing it in a new light.

Now if only they’d get a move on and do Blade Runner, I’d be in Greek Hippy heaven.

Out of interest, The Liverpool Philharmonic is one of the most disabled friendly venues I’ve been too, they get full marks for their fantastic staff and facilities. 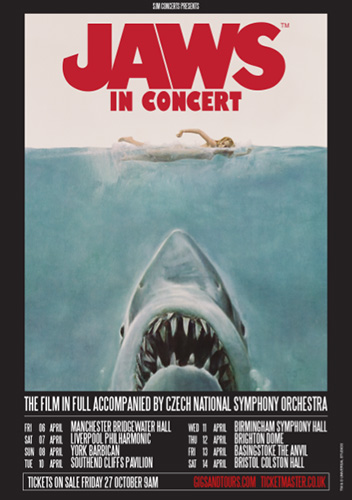 Addendum: As Tina has already mentioned, I too was taken by my dad to watch Jaws on its release back in 1975. We queued around the block to get into the Regal cinema in Northwich, and ended up in 2 of the final seats remaining in the front row. As a 10 year old child, THIS was the experience that got me hooked on cinema, and he very kindly gave in to my pleas to take me back the following evening, so that I could relive jumping out of my seat when that head appears!

Jaws has always been a very special film for me, and I’ve watched it many times over the years on VHS, Laserdisc, DVD and Blu-ray. This showing however, will always remain in my memory as one of the very best. Despite knowing the dialogue and music back to front, this was like watching it again for the first time, only with a more emotional punch as the wonderful Czech National Symphony Orchestra expertly played my heartstrings as I watched Spielberg’s masterpiece of cinema play out before me.

Below is the now long gone (as is the case with the Hippodrome in Wrexham) Regal Cinema in Northwich…the utopia of my cinema youth, and when it had upgraded to the huge amount of two screens. The interior shot is when the ‘posh seats’ had been installed…though these still had ashtrays on the back of each of them. A sign of a different time indeed!

Also make sure to read my review of the excellent ‘Score’ documentary. Another wonderful inroad to the magic of cinema music.

Review by Tina (co-host of 60 Minutes With).

I used to live in Los Angeles and write about Rock bands. Now I live in wonderful Wales and write about films. I like video games (especially RDR2) and am also a painter...gratuitous plug: follow my art account on Instagram @artbytinar
FREE album from Theia Retro Review: Rampage