It’s not surprising how a couple of my American friends thought Jonathan Pie was a ‘real’ newsperson. Slightly ruffled suit, windswept hair, squinting into camera, he does appear to be Mr BBC. One exclaimed her shock at him not being sacked for his ‘Potty mouth’.
(Oh such sweet lips that utter platitudes of angry exasperation at how shit humans are, especially the humans who are in charge. Men who make me laugh. Phwoar. Tom Walker is a double phwoar. Sorry, is that sexist? Am I objectifying him? Are my sexual fantasies about Tom Walker upsetting? Am I ‘Weinsteining’ him? ).

Jonathan Pie is played by Tom Walker and is a fictional angry ‘In the field’ newscaster. Written by Walker and fellow comedian Andrew Doyle, Pie first came to light in short YouTube videos examining (in a somewhat cross way), whatever political gaff had happened that day/week.

I was interested to see Walker’s new tour ‘Back to the Studio’ (which is how he normally ends each YouTube film with) as so far I’ve only seen Pie in snippets and wondered if he could fill an hour with his comedy.
He had no problem. Obvs.

But first, Andrew Doyle. I’d never seen Andrew before and in short, he’s fantastic. Being the warm up for any show must be difficult and he took the piss out of several audience members beautifully. As quick as a whip he had us all laughing. I’ll make an effort to check out more of his stand up.

Pie’s exasperated spoutings have made us at 60MW Towers hoot for a few years now. I think as time’s gone on its obvious that Walker (and maybe Pie) lean more towards the left, not necessarily labour, but rather socialism and, well… just caring (now I sound like a Guardian reader). So I guess us leaning towards the left of centre means we are a ready-made audience for his rhetoric. But unlike Mark Thomas, Josie Long, should I include Frankie Boyle here? Yes I must… Pie is a character, so perhaps he can go that little bit further, and he does.
Under the premise of a ‘new show for TV’ Pie takes us through The Tories and May, Trump and people glued to their mobile phones. Now this sounds pretty run of the mill stuff delivered by a cross actor, but the zinger is – he’s completely believable.

Like an accessory to The Thick of It, Pie holds up a mirror to people like me, faint hearted, fuckwitted do gooders (The ‘woke’ generation… Mm I dunno, I think I may be a little too old for that, perhaps I’m a TonyBenner? ) who are offended at all sorts of shit. I admit to feeling a little ashamed through the laughter, because, fuck him, he’s right. Gazing momentarily at ‘weak’ women he enters into a tirade about us bleeding from our vaginas that makes me wish he was presenting the Oscars this year. He’d make it bearable, and really memorable.

Walker’s performance as Pie is amazing (I would LOVE to see him play another part, he’s a really great actor), he’s playful yet vitriolic and exasperated. It’s a real powerhouse, exhausting to see, thrilling even, and also poignant (he sees a photo of his ex-wife’s new life and stares) then there’s all the hilarious dialogue. I don’t want to give the plot/show away, but Lordy I laughed…hard. (Note to Pie: please note that I put THREE dots there).

Despite being hilarious, the end message; to engage in debate, stop being fucking offended by everything, put your phone down and THINK, was a fitting end to the show.

Absolute corker of a show.

Review by Tina (co-host of 60 Minutes With) 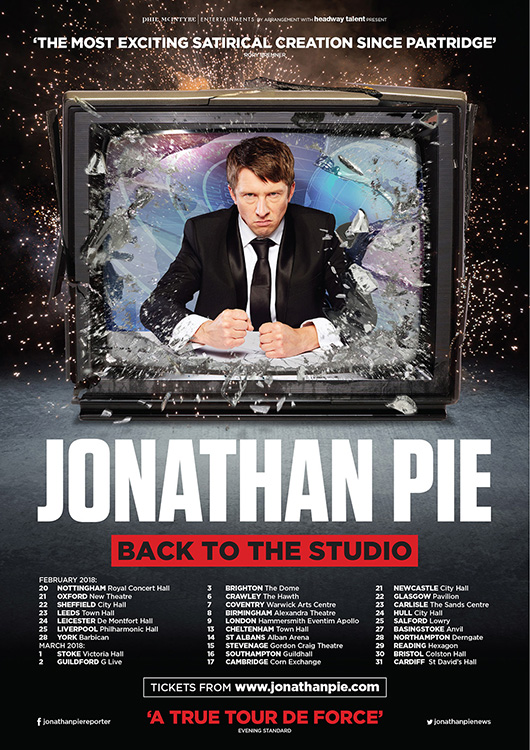 The below video is NSFW…unless you work with people with a sense of humour. (Three dots AGAIN. We can show Trump how to do it). (If you’ve seen the show, you’ll get the 3 dots references – Dave)

I used to live in Los Angeles and write about Rock bands. Now I live in wonderful Wales and write about films. I like video games (especially RDR2) and am also a painter...gratuitous plug: follow my art account on Instagram @artbytinar
Grimmfest 2018 Early Bird Submissions Deadline Chrono Trigger now available on PC