It’s been over a year since I first heard Kris Barras and loved his music so much that I put his song ‘Hail Mary’ on one of our Soundcheck ’em out shows for you all to hear (and buy).

It’s also been over a year since I was last at our beloved Tivoli venue too. Real life stuff, including a never ending bout of ill health, meant that 2018 was without a trip to my favourite music venue.

However, the stars aligned and not only was I back in the Tiv (for what is hopefully the 1st of many visits in 2019), but I was also going to see Kris Barras at last: a gig I’d been long anticipating since buying his great album The Divine and the Dirty.

The support was by Jack J Hutchinson; someone who I was unfamiliar with before this gig, but who now is on my ‘buy his music ASAP’ list. 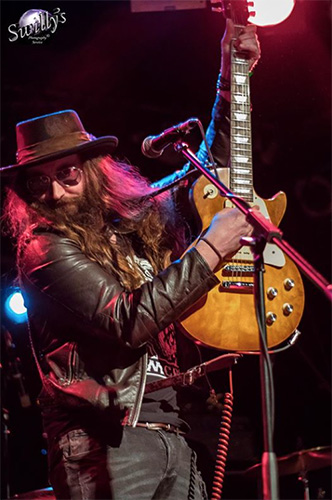 Jack is the guitarist/vocalist with the 3 piece band who play blues/rock with a passion that was palpable from the very first note that was caressed from his guitar.

The passion continued throughout their entire set, and even though I was new to all of their songs, they had me hooked and eagerly awaiting to hear more of their music.

Then it was time for Kris Barras. 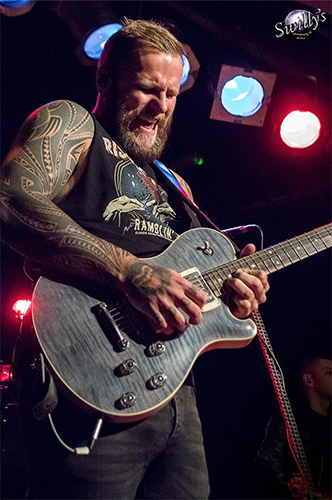 We were due to record an interview show with Kris before the gig, but were shocked when we had a message from him that afternoon saying the bands van had broken down en route to the gig. The AA couldn’t fix it and so they had to sort out a new van, transfer all of their equipment into it, then continue the journey from Torquay to North Wales. This made the trip 12 hours long, and coming after having to cancel their previous 2 shows due to illness. Kudos to them for not only making the gig, but also for playing a hell of a show despite being exhausted and recovering from ill health.

There’s always some slight trepidation after anticipating a live show for so long. Especially when you’ve heard the bands music for so long and loved it. Will they be good? Will the songs be done justice? What are the vocals and instrument playing like live?

In an age of YouTube it is all too easy to watch bands play live (even as it is happening), but there is NO substitution for getting off your backside and going to watch bands in a live environment. Make sure to support the bands you love by not only buying their music, but also going to see them live whenever you can too…especially when it’s at your local venue who work hard to keep great live music accessible to everyone.

Any slight trepidation I may have had was blown out of the door when the band hit the stage.

Illness, transport problems, and a horrendous 12 hour journey seemingly had no effect on the band as they went from one song to another with a devotion to their craft which had the North Wales crowd loving every second of it.

Kris has been playing the guitar since he was 5 years old, and rather then being an instrument that he plays, it is now more like an extension of his body that turns his emotions into glorious sounds that he accompanies by lyrics that are heartfelt and expressive. The song ‘Watching Over Me’ (written about his dearly departed dad) is sure to strike an emotional chord with anybody that has suffered loss, and is delivered in such an affecting way that tears will be mixed with cheers as the song reaches its impassioned climax.

The whole band are superb as each successive song showcases what a fantastic catalogue of material this band already has, and it was great news to hear Kris announce that a new album was recorded at the back end of last year for release later in 2019. Now that’s a pre-order I’ll be getting in early, as I suggest all of you do too…especially as we were treated to some new material from the upcoming album and it had everyone enthralled, despite being new to our ears.

Hail Mary is the song that put Kris onto my musical radar (and the song featured in our aforementioned Soundcheck ’em out show) and so to hear it played live was an absolute joy. In fact, listening to The Divine and the Dirty album in my car on the way back (as I did on the way there), every song was brought even more to life in the live environment. A more raw sound of course, but emotionally charged and unrestrained in a way that gives them a completely new lease of life and connected them even more with me.

2018 was a hell of a year for Kris Barras, and 2019 is shaping up to be even more successful too, and rightly so. I encourage you all to not only buy his music, but also to see him live at the earliest possibility. I for one am already looking forward to seeing the band live again at the earliest opportunity.

Hopefully we can rearrange the interview with Kris soon (I’d also love to do a show with Jack Hutchinson too) and you can hear even more about him.

If you do buy music from the bands (and I thoroughly encourage you to do so), please use the Amazon link on our website. Doesn’t cost you a penny more and it helps us to fund even more competitions.

Once again a HUGE thank you to Roki and Kirsty whose hard work and perseverance keeps the Tiv as THE venue to go to.

Review by Dave (host of 60 Minutes With) with thanks as always to Roki and Kirsty.